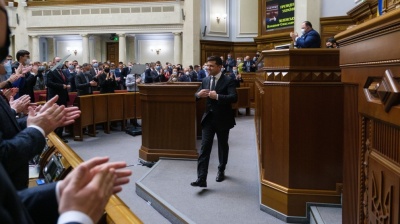 From October 8–15, the Kyiv International Institute of Sociology (KIIS) conducted a nationwide poll asking Ukrainians about the state of the country and their perceptions of its parties and politicians. As it turns out, 69.5% of respondents believe that Ukraine is heading in the wrong direction, while just 21% believe the country is on the right track.

Moreover, this negative sentiment was the majority consensus across all regions: 72.7% felt this way in the West, compared with 67% in central Ukraine, 75% in the South, 67.2% in the East, and 68% in the government-controlled areas of the Donbas.

According to the survey respondents, Ukraine’s top three problems are the war in Donbas (63%), corruption (53%) and unemployment (43%). “This is followed by utility tariffs (29%) and economic crisis prevention / economic development (28%),” KIIS says. “Controlling the spread of the coronavirus [COVID-19] is only in eighth place (11%).”

Ahead of this weekend’s local elections, these results don’t bode well for Ukraine’s politicians. But the results regarding popular perceptions of political parties are arguably even worse. As it turns out, “71% of respondents could not name at least one party which, in their opinion, is associated with having an ‘impeccable reputation’,” KIIS says.

Perceptions of President Zelenskiy’s Servant of the People were relatively better, with just 14% of respondents associating the party with corruption. On the other hand, just 21.5% of those surveyed associate the president’s party with European integration – roughly the same number thought of Batkivshchyna. Perhaps unsurprisingly, more than half (53.5%) said European Solidarity.

Asked which politicians they most associate with corruption (from a list of ten names), 53% of respondents said Poroshenko, 35% said Tymoshenko, 29.5% said Viktor Medvedchuk, 24% said Yuri Boyko, and 10% said Volodymyr Zelenskiy. The majority of respondents – 68% – couldn’t name a single politician on the list with an “impeccable reputation.” Just 12% chose Zelenskiy’s name.

COMMENT: Ukraine is set up for a fast recovery
NBU says no IMF tranche for Ukraine this year
Ukrainian President Zelenskiy would win a presidential election tomorrow, but his SOTP would come in third