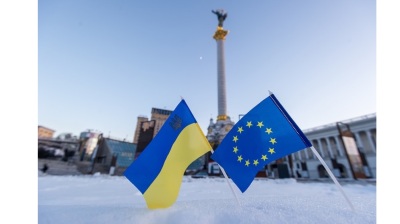 60% of Ukrainians want to join the EU and only a quarter are opposed, says a new poll. In the west of the country 84% are in favour but in the east only 46% support the idea.
By FPRI BMB Ukraine March 27, 2021

According to a recent survey from the Razumkov Centre, 59% of Ukrainians are in favour of their country joining the EU, while 26% are opposed. That said, the polling results show significant variation when broken down by region, age group and political leaning.

Western Ukrainian respondents showed the highest support for EU accession, with 84% in favour and just 8.5% opposed. Among respondents from central Ukraine, 63% are in favour and 19% are opposed. In the country’s east, 46% of respondents don’t want to see Ukraine join the European Union, compared with 38.5% that do. In the South, opinion is split, with 41.5% respondents for and 42% against.

At the same time, Ukrainians aren’t overly optimistic about the future of their country’s relations with the European Union. Indeed, 39% of respondents expect relations to remain unchanged, while 26% believe they will improve, and 10% expect things to deteriorate. The share of “Euro-optimists” was highest among Servant of the People voters (48%), followed by European Solidarity supporters (38%).

FPRI BMB Ukraine: Turning up the heat in the Donbas and Crimea
ASH: Ukraine, ask yourself what Putin wants
MOSCOW BLOG: It’s time for a new pan-European security treaty

For the past couple of weeks, videos have flooded social media showing convoys of Russian military trucks, trains full of tanks, and hordes of helicopters heading toward Ukraine. The question everyone’s asking is: is Russia going to invade Ukraine?

Russia has the most troops on Ukraine's border than at any time since 2014 but what does Russian President Vladimir Putin actually hope to gain? Tim Ash, Senior Sovereign Strategist at BlueBay Asset Management runs through the possibilities

The medical consensus is that it takes roughly two months for someone to die of starvation. Dying, as Gore Vidal drily observed, can be a good career move, but it has its downside. Jailed opposition figure Alexei Navalny is on hunger strike.

After much anticipation, US President Joe Biden and Ukrainian President Volodymyr Zelenskiy finally spoke on the phone last Friday.

Russia will probably not invade, at least in the short term, but it won’t stop threatening Ukraine until it believes that it doesn’t pose a future threat to the current regime in Russia.

FPRI BMB Ukraine: Turning up the heat in the Donbas and Crimea
1 day ago
ASH: Ukraine, ask yourself what Putin wants
3 days ago
RIMMER: The Hunger Games
3 days ago
FPRI BMB Ukraine: Zelenskiy-Biden talks
4 days ago
COMMENT: Is Ukraine facing an imminent Russian invasion?
5 days ago