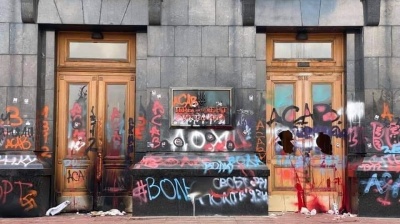 On Saturday, March 20, hundreds of demonstrators gathered outside the President’s Office in Kyiv, demanding the immediate release of Serhiy Sternenko, a controversial Odesa activist who was sentenced to seven years in prison last month.

While the authorities acknowledged that most of the protesters were peaceful, they estimated the damage from the rally at about UAH2mn, or $71,500. Some demonstrators broke windows, set off firecrackers, and spray-painted the building’s exterior. Though police officers were present at the rally, they deliberately avoided intervention.

Mykhailo Podoliak, an advisor to Zelenskiy’s chief of staff, chalked up these actions to “a political provocation,” adding that there was no need to disperse the crowds. “President Volodymyr Zelenskiy’s concept is very simple: if people want to go out and say something, please come out and speak,” he said. However, Kyiv police have launched an investigation into the hooliganism and vandalism that took place during the rally.

NV editor Ivan Verstyuk described Ukrainian civil society as “divided” over the demonstrations. “[The] protests are obviously not just about Sternenko, but about wider dissatisfaction,” he commented on Twitter.

The graffiti symbols sprayed on the presidential office building also drew a lot of negative attention. “This is how Ukrainian protesters fight against the lack of justice in Ukraine. They have their reasons, but the world would not understand that a sham verdict and no reaction from the government led to this. The world will see f**king swastika on the office of a Jewish president,” Ukrainian journalist Nika Melkozerova tweeted.

“I don't know what all of this means – other than that Ukraine's protest scene is complicated, the political spectrum is muddled, and categories like ‘pro-Russian’ and ‘pro-Ukrainian’ are ... tricky,” she concluded.