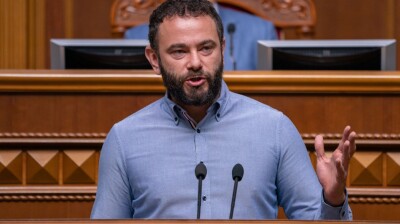 Servant of the People Party expelled its most contentious member, Oleksandr Dubinsky, who was close to oligarch Ihor Kolomoisky.
By FPRI BMB Ukraine March 22, 2021

Last week, the ruling Servant of the People party expelled its most contentious member, Oleksandr Dubinsky. Perhaps unsurprisingly, the removal of this US–sanctioned lawmaker has many experts saying “I told you so.”

“I can’t recall any examples of any member of any party so persistently seeking their own expulsion,” wrote political scientist Petro Oleshchuk in the aftermath. In his words, this development isn’t a “sensation,” but rather the “logical result” of Dubinsky’s own “conscientious work.”

Indeed, Dubinsky had developed a reputation for his willingness to undermine his own party, particularly to support the apparent interests of oligarch Ihor Kolomoisky. After his removal from the Servant of the People faction at the end of January, some feared the worst-case scenario of other MPs leaving too and costing the governing party its mono-majority (Hromadske International). Nevertheless, this didn’t happen then and it doesn’t appear to be happening now.

Notably, Dubinsky’s removal comes on the heels of Zelenskiy making a public appeal to his ruling party for less infighting and more progress on reforms. (Keep in mind that the majority faction has struggled to pass legislation without opposition support).

This shake-up has also added fuel to the rumors that Yulia Tymoshenko’s Batkivshchyna Party might form a coalition with Servant of the People. Novoye Vremya editor-in-chief Andriy Smirnov even connected the dots to suggest that Tymoshenko may fill the void Dubinsky is leaving behind.

Tymoshenko, on the other hand, was quick to dispel such speculation, saying that there’s no chance of Batkivshchyna forming a coalition until Zelenskiy’s government reviews Ukraine’s “development vector”. Recent analysis from VoxUkraine (to be discussed further in the next column) also points to the two parties not being on the same page, describing Batkivshchyna’s Rada faction as primarily made up of “anti-reformers.”

Against the backdrop of these developments, recent Razumkov Centre and Rating Group surveys show increased support for Servant of the People this month. While Razumkov reported a jump in support from 22% in February to 26.5% in March, Rating Group marked a slighter increase from 18.6% to 19.5% during the same period.

Batkivshchyna and SOTP can’t work together

The Verkhovna Rada’s ninth convocation saw a decrease in support for reform initiatives during its fourth session, according to analysis from VoxUkraine. Compared to its first four months in “turbo mode” when the parliament passed 72 reform bills, just 25 made it through during the fourth session. “Despite the slow pace of reforms, the average level of support remains unchanged at 66%,” writes analyst Maryna Ott.

Notably, for the first time in the history of the ninth convocation, the Rada’s top reformer isn’t a Servant of the People lawmaker. MP Andriy Sharaskin from the Voice [Golos] party, who entered parliament in November 2020, stole first place by supporting 100% of the four reform bills adopted during his short time in the Rada.

On the other hand, the Rada’s top three “anti-reformers,” who have voted in favour of 1–3% of reform bills during the entirety of the ninth convocation, are all from Opposition Platform – For Life (OPZZh). Moreover, they haven’t supported a single reform initiative in the last two sessions.

Among the factions in the Rada, support for reforms is highest among lawmakers from Servant of the People (84%) and Voice (72%). That said, support for reform bills among the ruling party’s deputies has dropped noticeably since the second session. Meanwhile, the European Solidarity and Trust factions are showing a positive trend toward support for reforms (growing from 56% to 61% and from 58% to 62% respectively).

Overall, VoxUkraine’s rating system shows that the number of committed “reformers” and “anti-reformers” is on the decline. Instead, the number of “moderate reformers” – those who support 40–88% of reform bills – has gone up. In the fourth session, 233 lawmakers fell into this category, compared with 219 during the third session.

The “moderate reformer” group includes the entire Voice faction (minus Sharaskin), 25 of European Solidarity’s 27 deputies, 143 Servants of the People, and all but one MP from the Trust faction. Meanwhile, the number of “anti-reformers” has fallen from 94 to 87; this includes all the MPs from OPZZh, and the majority of both the For the Future and Batkivshchyna factions.