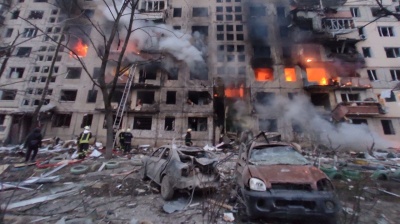 The latest estimate for the cost of the damage to Ukraine is $4.5bn a week and a total of $600bn, according to the Kyiv Economic School. / wikii
By FPRI BMB Ukraine June 8, 2022

With Russia’s war entering its fourth month, Ukraine increasingly finds itself under almost unbearable financial and economic pressure. According to an ongoing study from the Kyiv School of Economics, Ukraine is suffering about $4.5bn worth of damage to civilian infrastructure every week, and the country’s total economic losses could hit $600bn. The World Bank expects Ukraine’s GDP to contract by 45% in 2022.

Rinat Akhmetov, Ukraine’s richest man and owner of a lot of industrial infrastructure in the Donbas (such as the infamous Azovstal steel plant) even declared that he intends to sue Russia and “demand proper compensation for all losses and lost business,” which he claims amounts to $20bn.

Despite calls for Moscow to finance the reconstruction of post-war Ukraine, the necessary funds are unlikely to come from Russia. Ukrainian economist Yuriy Gorodnichenko, who recently co-authored a blueprint for rebuilding Ukraine, is already advocating for a Ukrainian version of the Marshall Plan set up by the US after WWII. “Given the level of economic development and proximity to the EU, Ukraine will likely resemble Europe after WWII, rather than Iraq or Afghanistan in 2002/2003,” he argues.

At the moment, Western aid is keeping Ukraine afloat. Washington’s last assistance package amounts to roughly $40bn, while the EU’s is worth $9bn in the form of loans. Nevertheless, Ukraine is facing galloping inflation, which its central bank is trying to curb by raising its benchmark lending rate from 10% to 25%. “The Ukrainian central bank (NBU) chose to support the solvency of the hryvnia. In the future, the NBU intends to gradually reduce its benchmark lending rate in order to stimulate economic development after winning the war,” Ekonomichna Pravda journalist Yaroslav Vinokurov writes about this decision.

Looking forward, a key issue will be whether the West will provide financial support for reconstruction in the form of grants or loans. In the latter case, Ukraine could be mired in economic difficulties for decades to come. Some economists, like Yulia Yurchenko, are already calling for the cancellation of Kyiv’s foreign debt. That said, economist Yuriy Gorodnichenko sees some reason to be optimistic: if it receives its own “Marshall Plan,” post-war reconstruction could be a once-in-a-generation chance to modernise Ukraine.

EXPLAINER: how a price cap on Russian oil might work
Kazakhstan: Sanctions likely behind fresh delay at new Baikonur launchpad
Europe’s gas storage on track to meet 80% full by start of heating season

Turks are rightly proud of the success of Bayraktar drones in the conflict in Ukraine and Ukraine was grateful, but now they are not so sure as Turkish President Recep Tayyip Erdogan plays both side of the fence.

NEMETHY: Is the US Fed playing with the wrong levers?

Many economists are of the opinion that the US Fed has had a pretty abysmal track record in forecasting inflation during past years. It first deliberately changed policy to allow inflation to run hot at higher than 2%, but now it's too high.

ASH: Turkey playing a delicate balancing act between Ukraine, Russia and NATO
19 hours ago
HESS: West wins the default battle but the economic war must go on
1 day ago
NEMETHY: Is the US Fed playing with the wrong levers?
1 day ago
Ukraine has been clear that it needs more weapons from the West. So, what’s the holdup?
4 days ago
COMMENT: Why replenished ties between Uzbekistan and Turkey suit both Tashkent and Ankara
5 days ago