Russia has set up a military camp in Voronezh near the Ukrainian border where troops are camped out and Iskander short range missiles have been deployed, but most experts doubt any invasion is imminent
By FPRI BMB Ukraine April 11, 2021

For the past couple of weeks, videos have flooded social media showing convoys of Russian military trucks, trains full of tanks, and hordes of helicopters heading toward Ukraine. The question everyone’s asking is: is Russia going to invade Ukraine?

BMB Ukraine has covered this issue in depth in its past few newsletters, but for those who need a quick catchup, here’s some background. In July 2020, Russia and Ukraine brokered a ceasefire in the Donbas. The cessation of hostilities largely held through the end of last year. From July to December, just four Ukrainian soldiers died. However, the agreement broke down earlier this year and fighting has been escalating in the Donbas since. Twenty-five Ukrainian service members have died since the beginning of 2021, with many deaths occurring in just the last two weeks. On April 3, the Organization for Security and Cooperation in Europe (OSCE) recorded over 1,400 ceasefire violations, a marked increase from the nearly 600 violations recorded the day prior. Against the backdrop of increased fighting in the Donbas, Russia has begun amassing troops along its border with Ukraine and in occupied Crimea.

As BMB Ukraine wrote on Wednesday, Russia has amassed the largest concentration of troops on Ukraine’s border since it first invaded seven years ago. Russian military officials have issued post-hoc justifications for the force movements, claiming that they are carrying out normal exercises aimed at ensuring the security of Russia’s borders. Yet the scale of the deployments does not align with these explanations. Several of the units being deployed are so-called “permanent readiness” units— the most experienced troops in the Russian military—and based in far-away regions like Siberia. Russia only transfers these units during large-scale strategic exercises, which are not scheduled to occur until September.

Most military experts seem to be saying that an invasion is not imminent, but the troop movements are concerning and need to be closely watched. In the past couple of days, open source intelligence analysts have uncovered some interesting details.

The Moscow-based Conflict Intelligence Group (CIT Group) has geolocated a Russian army camp in the Voronezh region, approximately 155 miles from the Ukrainian border (here is its location on Google Maps). When Russia first invaded the Donbas, it set up an army camp much closer to the Ukrainian border in the Rostov region (geolocation here). Of note, the Voronezh region does not border either of the self-proclaimed Donetsk or Luhansk People’s Republics; it borders Ukrainian-controlled territory. This location in part has led military analysts to say that Russia’s posture is offensive, and not defensive as Russian officials have claimed. Put another way, the likelihood that the Ukrainian military is not going to invade mainland Russia is nil.

Analysts note, however, that the location of Russia’s army camp does not necessarily mean that Moscow plans to take more Ukrainian territory. If the goal is simply to intimidate Kyiv via muscle-flexing, the uncertainty that arises from the Voronezh location is sufficiently threatening. 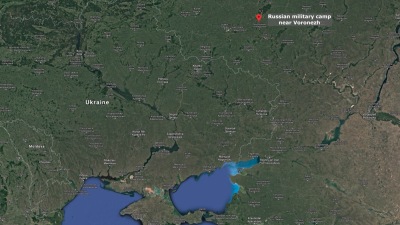 Another threatening development is Russia’s deployment of Iskander short-range ballistic missile systems to the Voronezh camp, identified by analysts at Janes. The missile system can launch both conventional and nuclear warheads at ranges up to 500 km (310 mi).

Regarding Crimea, analysts at Rochan Consulting have looked into Russia’s Dzhankoy Air Base on the peninsula to see if there’s been an increase in activity indicating preparation for offensive actions. They’ve found no evidence of a large buildup. The number of helicopters at the base is standard, and the S-400 air defense missile system is at low readiness status.

However, others note that the full scale of Russia’s deployment remains to be seen. According to the freight tracking service GdeVagon that open source reporters are using, some troops are not scheduled to arrive in Crimea until mid-April. How this plays out thus remains to be seen.