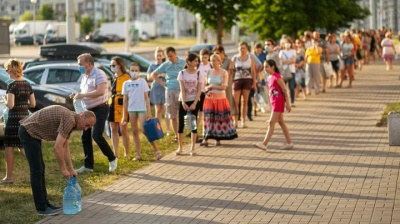 With no fresh water coming out of the taps, residents of Minsk have been forced to queue up to get water from trucks that bring it in from outside the capital
By bne IntelliNews June 25, 2020

With the country already wracked by nationwide protests, Belarusians had a new problem to deal with on June 24: finding fresh drinking water.

Supplies of fresh drinking water in Minsk were turned off in some districts, or were simply unusable after it was found to be contaminated. The city responded relatively quickly and started trucking water into the capital in tankers, leading to long queues of people waiting to fill up bottles and buckets over the last two days.

“[This is] the second day in Minsk there are problems with drinking water. Its quality in the Frunze and Moscow districts of the capital is so disgusting that you cannot drink it, [and you] also cannot take a shower, wash your hands, dishes, wash and water indoor plants,” the Tut.by reported.

The public was already angry with Belarus President Alexander Lukashenko’s failure to take the coronavirus (COVID-19) epidemic in the country seriously, where the number of infections is just shy of 60,000 people – about four times more than in neighbouring Poland, which has a significantly larger population. Now the collapse of the water system is likely to stoke more anger against the administration of Lukashenko, who is running for re-election in August. 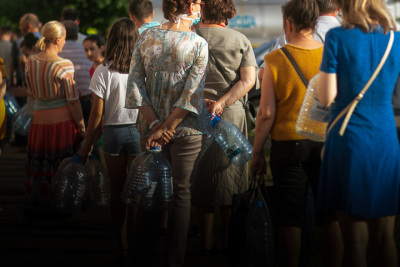 The authorities were silent about the problems with the water on Wednesday, but the chief medical office issued a short statement to the press on June 25.

“According to the results of laboratory tests, the non-compliance of drinking water with the requirements of the Sanitary Rules and Norms was established according to the following indicators: odour at 20 ºС and 60 ºС, permanganate oxidisability, oil products. At present, drinking water is not harmless in chemical composition and not favourable in organoleptic properties. In connection with the identification of violations of the law that pose a threat to life and health of the population, it is necessary to notify the population as soon as possible about the prohibition of the use of water from the drinking water supply for drinking purposes in the Frunzensky and Moscow districts of Minsk,” the chief medical officer of Minsk, Nelly Gindyuk, said in the statement.

Gindyuk didn't say what was contaminating the water, but did mention the Minskvodoprovod sewage treatment plant in the statement, suggesting that raw sewage has somehow leaked into the water system.

The other possibility is an algae bloom in the lake outside the capital, where much of the water for Minsk is held in reserves, caused by the warm weather. If this is the case, then it could take much longer to solve the problem, or simply waiting until the weather cools and the bloom dies back.

However, on the morning of June 25 the Ministry of Emergencies (MchS) issued a recommendation to the public: “do not use water if its appearance, colour or smell differs from usual.”

“By Wednesday evening, we were assured yesterday, we’ll fix everything, everything will be fine. By Thursday afternoon, everything was just as bad, only the geography of complaints has expanded,” Tut.by concluded.

As of June 25 MChS released a map online showing where water trucks would be available for residents to get fresh water in the meantime. A larger part of Minsk now seems to be affected.