FSB admits to “close’ surveillance of Russian opposition activist Navalny, who was medivaced to Berlin after suspected poison attack 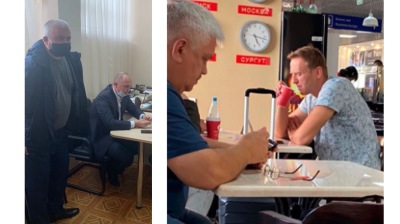 What appears to be the same unidentified man is both in the head doctor’s office in Omsk (left) and sitting at an adjoining table to Navalny in the airport café in Tomsk (right)
By Ben Aris in Berlin August 23, 2020

The Russian Federal Security Service (FSB) admitted to closely following anti-corruption blogger and opposition activist Alexei Navalny while in Tomsk, where he appears to have been poisoned. Giving an unusual amount of detail of its surveillance operation, the service admitted it had followed him “very closely” and seen “nothing suspicious.”

Navalny arrived at Berlin’s Charité hospital on August 22 in a police convoy from Tegel Airport and remains under heavy guard with three cordons of police on his ward. He spent nearly two days in a hospital in Omsk after he fell gravely ill after a visit to Tomsk on a plane returning to Moscow that was forced to make an emergency landing in Omsk.

Doctors in Omsk were initially co-operative until three men, apparently from the security services, arrived at the hospital, after which they refused to allow Navalny to be medevaced by a high-tech ambulance plane sent from Germany.

Navalny's supporters said the delay in giving permission for him to be transferred was a ploy to stall his treatment until there was no more poison in his system. The Kremlin denied the claim.

The plane was paid for by Boris Zimin, the son of the founder of VEON (formerly Vimpelcom), the holding company that owns Russia’s Beeline mobile phone brand, who is known for his philanthropy, according to a report by the BBC. Separately, Deutsche Wella reported that Jaka Bizilj, the founder of German NGO Cinemas for Peace, paid for the plane.

At the time of writing no new details of Navalny’s condition have been released, but the last reports were that his condition was “stable.” He arrived in Germany in a coma, where doctors said they were carrying out “extensive” tests to determine the cause of Navalny’s collapse.

The German government said it "hopes that the treatment at Charite leads to an improvement in his condition and enables a full recovery," according to an official spokesperson.

The statement by the FSB was surprising in the level of detail it gave, throwing some light on just how heavily Navalny’s movements are monitored by the state.

The FSB admitted that it had followed Navalny from the moment he had arrived in Tomsk, using both agents and overhead drones.

Observers also pointed out that one of the men in the now famous picture of Navalny drinking a cup of tea in an airport café that is thought to be the source of the poison looks very similar to one of the three men that later appeared in the head doctor’s office in Omsk where Navalny was being treated.

Yulia Navalny, the activist’s wife, tweeted that the three men in suits had taken over the head doctor's office, and speculated they were from the FSB or the Investigative Committee. 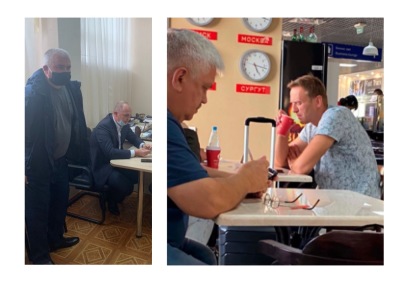 The reports detailed a game of cat and mouse playing out in Tomsk, where Navalny had gone to rally local support ahead of regional elections slated for September 13.

His team booked seven rooms in the local Xander Hotel, despite only being a party of four, and also rented a “safe” apartment, although Navalny slept in one of the rooms that was not registered in his name. He also avoided cameras and did not use his own credit card to pay for the room. But the FSB had surveillance photos of all his movements in Tomsk, including pictures of those he met.

It was thanks to this heavy surveillance that the FSB claim nothing untoward happened: “Under the cameras and in public places, law enforcement officers did not establish any unnecessary or suspicious contacts that could be associated with the poisoning,” the FSB said, as cited by Moskovsky Komsomolets. They even included in their report that Navalny had a dip in the Tom river, as he likes to swim in all the regional cities he visits.

The authorities said it was a mystery as to where traces of alcohol in his blood came from. His team visited the Vinograd alcohol store, but “police arrived and confiscated the receipts”, which show only fruit juice and water was purchased. The security services also report that Navalny didn't buy any household chemicals or visit a pharmacy.

The Investigative Committee, an independent security service that answers only to Russian President Vladimir Putin, also admitted it has launched its own investigation. According to MK, the committee has not ruled out poisoning but has ruled out Navalny was poisoned during his visit to the city and if he was poisoned then it happened at the airport or on the plane to Moscow.

The poisoning of Navalny prompted widespread comments that “Putin did it,” as it fights with the narrative and five other prominent Russian dissidents have also been poisoned, as bne IntelliNews reported.

However, Mark Galeotti, honorary professor at UCL School of Slavonic & East European Studies and bne IntelliNews contributor, says that it is not clear who had the most to gain from the attack and that thanks to his corruption investigations the list of Navalny’s enemies is long.

“For many, this must have been a “Kremlin hit,” but the uncomfortable truth is that under Vladimir Putin, political murder is no longer a monopoly of the state,” Galeotti wrote in an op-ed.

“It is certainly not impossible that the Kremlin was to blame... In Navalny’s case, there is no lack of potential enemies. Someone he was investigating for one of his forensically presented and devastating video exposes of official corruption, who assumed that the Kremlin would ultimately forgive direct action? A political figure who feared Navalny’s electoral tactics or who assumed that the Kremlin would like to see him taken out of the equation? One of the big beasts of the system, who doesn’t have to care too much what a frankly diminished president thinks, or who believes he can count on the boss’s indulgence? So far, at least, we don’t know.”