Game of Thrones tourism brought in €180.7mn for Croatia 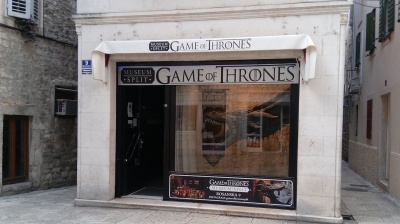 The Game of Thrones museum in Split, Croatia.
By Denitsa Koseva in Sofia December 5, 2021

The filming of Game of Thrones has improved Croatia’s screen tourism with a rising number of new tourism offerings at filming locations attracting local and international visitors, a study by the University of Zadar showed.

The filming of the series of Game of Thrones in Dubrovnik, around Split and in the surroundings of Sibenik has led to flourishing interest into these tourist destinations, bringing the country €180.7mn between 2013 and 2018.

The producers of the third and fourth seasons of the Game of Thrones series used the Croatian incentive programme, which guarantees a refund of 20% of the costs spent during filming in Croatia.

“[I]nvesting in the development of the film industry potentially encourages the development of film tourism, which may be an opportunity to reduce the predominance of natural beauties and weather forecast of Croatian tourism,” the research noted.

Some agencies also offer entire routes on which certain episodes of the series were filmed.

“Thanks to the Game of Thrones, Dubrovnik has become recognisable as a location at the top of film-inspired tourist destinations," the paper noted.

14.2mn viewers of the series have seen the locations in Croatia, while information in international media on the locations has significantly increased interest in the three historic Croatian towns.

Tourism is a key industry for the Croatian economy. In 2020, it was badly hit by the coronavirus (COVID-19) pandemic and its better-than-expected recovery in 2021 pushed up the economic recovery.

However, the country’s tourist facilities are facing a shortage of up to one-third of the workforce needed in 2022, according to the head of the national association of biggest tourist firms Veljko Ostojic, Reuters reported on December 3.

"Some 100,000 people work in the tourist sector and we are missing some 30,000 to 35,000 people. The tourist businesses have no time to wait and many have kicked off campaigns to seek skilled people," Ostojic told Reuters.

To secure enough labour, owners of hotels, restaurants and bars are hiring skilled workers from other Balkan countries like North Macedonia, Bosnia & Herzegovina, Serbia and Montenegro, but also in some more distant countries like Ukraine or the Philippines.

However, in Croatia wages for these workers are significantly lower compared to countries like Austria or Germany.