Gas price hike sends Moldova’s inflation up to 12.4% in November 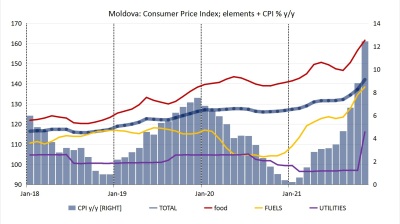 Moldova’s headline inflation soared from 8.8% y/y in October to 12.4% y/y in November as the natural gas price soared by 80% as of November 1, the statistics bureau BNS announced. Prices rose by 3.5% in November compared to October.

The National Bank of Moldova (BNM) decided to increase the refinancing rate by 1.0 pp to 6.50% at its December 3 meeting.

This was the fourth rate hike this year to address rising inflation and inflationary expectations. Further monetary policy tightening may follow, as the inflation was not the result of only temporary rise in the energy prices.

In November, BNM doubled the forecast for next year’s average inflation to 14% y/y.

The energy market regulator revised the regulated gas price as of November 1, in response to the higher prices to be paid to Gazprom and outstanding prices paid in October before the signing of the new long-term contract.

The natural gas price, 76% higher in November compared to November 2020, contributed however only 1.4pp to the overall 12.4% y/y inflation.

The food and fuel prices have also contributed significantly to inflation, which reached the highest level since 2015.

The price of fuels increased by 33% y/y contributing 1.9pp to the overall inflation.

President says Moldova not under threat despite latest Transnistria blasts