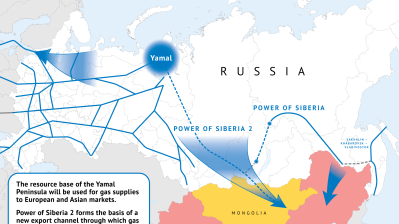 Route of second Russian gas pipeline through Siberia to China / Gazprom
By bne IntelliNews May 19, 2020

Russia’s Gazprom is pushing ahead with plans to build a second major gas pipeline to China, against a backdrop of unprecedented turmoil in global energy markets.

Gazprom CEO Alexei Miller announced to Russian media on May 18 that the company had begun design and surveying work for the pipeline, which will pump up to 50bn cubic metres per year of Russian gas to consumers in China. This comes after Russian President Vladimir Putin cleared Gazprom to begin preparation for the project in late March.

The launch of Russia’s first pipeline to China in December, the 38 bcm per year Power of Siberia, was no small feat. Moscow and Beijing took over a decade to reach 30-year supply contract to underpin its development, finally striking a deal in 2014. The pipeline took five years and reportedly more than $55bn to complete.

Chinese gas demand has weakened this year on the back of measures to combat the spread of coronavirus (COVID-19). But Gazprom is banking on long-term growth, with Chinese authorities predicting that consumption will rise by almost two and a half times by 2050.

Unlike Power of Siberia, which flows gas from Eastern Siberia to China, the Power of Siberia 2 pipeline will pump gas all the way from the Russian Arctic. The Yamal Peninsula in Russia’s far north contains many of the country’s biggest untapped gas deposits.

“The objective is to connect the gas transportation infrastructure in the west and east of Russia,” Miller told reporters on May 18.

It will also run through Mongolia rather than directly into China. The Mongolian route was China’s preferred option, while Russia had earlier wanted to build a pipeline through Russia’s Altai region. Beijing was cold on this proposal, as it would have required the construction of thousands of kilometres of pipeline through China’s restive north-west region of Xinjiang.

Given how long it took China and Russia to advance their first pipeline project, Power of Siberia 2, if realised, is unlikely to flow gas before 2030. In the meantime, China has other options for meeting its growing import needs, including increased LNG supplies and extra gas from Turkmenistan.

The first Power of Siberia is not due to reach its full 38 bcm per year capacity until 2025 and is expected to flow just 5 bcm of gas this year. Gazprom is drilling wells and erecting new production facilities to ramp up supplies. How quickly the project will earn back its substantial costs is unclear, as Gazprom and its Chinese partner CNPC have never disclosed their 2014 pricing agreement for supplies.

Power of Siberia 2 will cost $20bn to lay, assuming a total length of 4,800 km, VTB Capital (VTBC) estimated in a research note on May 19. This sum excludes necessary upstream investments. The bank also warns that running the pipeline through Mongolia creates transit risks.

Gazprom’s capital expenditure has surged to record levels in recent years, in order to fund Power of Siberia and other ambitious international pipeline projects. Back in February the company promised investors it would keep average capex at 11% below last year’s RUB1.1 trillion ($15bn) between 2020 and 2030, and it has had to rein in some spending in response to the COVID-19 crisis.

However, there are signs that Gazprom is falling into old habits. Power of Siberia 2 is one of several major new projects that company has unveiled over the past year, another one being the $9.65bn Ust-Luga gas processing and LNG complex. Keeping a lid on spending could prove easier said than done.