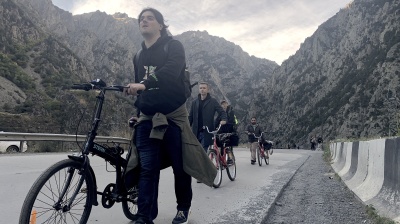 The fastest and easiest way to cross the Russian border into Georgia is by bike after the authorities banned cars from doing so. Some 260,000 Russians have fled since Putin ordered a "partial" mobilisation last week. / bne IntelliNews
By Mack Tubridy in Stepantsminda on the Russian-Georgian border September 29, 2022

For the past five days, Pytor (last name withheld) has travelled back and forth between Tbilisi and Georgia’s northern border with Russia. Each morning he stops by the market near his apartment to buy bread, tomatoes, plums and water for Russians stuck in no man’s land at the border crossing. He also offers rides back to Tbilisi for any new arrivals who manage to get through passport control.

“Some of these people are trapped on the border for days without food or water. And when they cross over, their phones don't have an internet connection. Some don’t have enough money to pay for a taxi to Tbilisi or Batumi,” Pytor told bne IntelliNews standing by the road on the Georgian side of the border.

Putin announced a “partial mobilisation” on September 21 and Defence Minister Sergei Shoigu clarified that some 300,000 men aged between 18 and 35 from Russia’s military reserves will be called up. Immediately thousands of Russians, mostly men, rushed to airports and land border crossings to avoid the draft and be sent into what many have dubbed the meat-grinder of fighting in Ukraine. Georgia is one of the few countries sharing a border with Russia where its citizens can enter without applying for a visa. As of September 29 a reported 260,000 Russian men have fled the country.

According to the Ministry of Internal Affairs for the Republic of North Ossetia, which borders Georgia, 4,900 vehicles are waiting in line at the border. Meduza reports that as of September 27, the line of cars leading up to the border checkpoint stretched more than 20 kilometres.

Pytor, who is originally from the Komi Republic and left Russia back in 2021, decided to start offering assistance to people passing through the border after he read online that many people fleeing had not prepared enough food and water for the arduous mountain journey. He asked to go only by his first name since he still has family and friends living in Russia, whom he thinks authorities could persecute if they found out he was helping men fleeing the country.

Pytor’s daily route from Tbilisi to Georgia’s border with Russia takes about four hours by car and winds along steep, mountainous terrain. In Stepantsminda, the nearest town to the border, new arrivals from Russia loiter around shops, fill up water bottles at the public fountain and look for drivers who will take them to Tbilisi. More prepared are the stream of riders on bicycles arriving from Russia that flows into the town.

Once at the border entrance, Pytor flags down cars going in the direction of Russia to see if anyone will agree to bring food and water into the neutral zone between the Georgian and Russian checkpoints. Many decline, but after about 15 minutes, one driver agrees.

The vast majority of the new arrivals slowly making their way up the road from the Georgian checkpoint are men, although some women and children pass through occasionally. Many look exhausted and some have not slept in days.

“Going through the Russian side is quick, but sometimes it can take days – three or four – on the Georgian side,” said one new arrival from Russia who asked not to be named.

Evgeny Kuznetsov, who travelled from Krasnodar, says he has gone more than 30 hours without sleep. “I took a bus to Vladikavkaz, then a taxi to where the line of cars starts, and then another 16 kilometres by foot.” 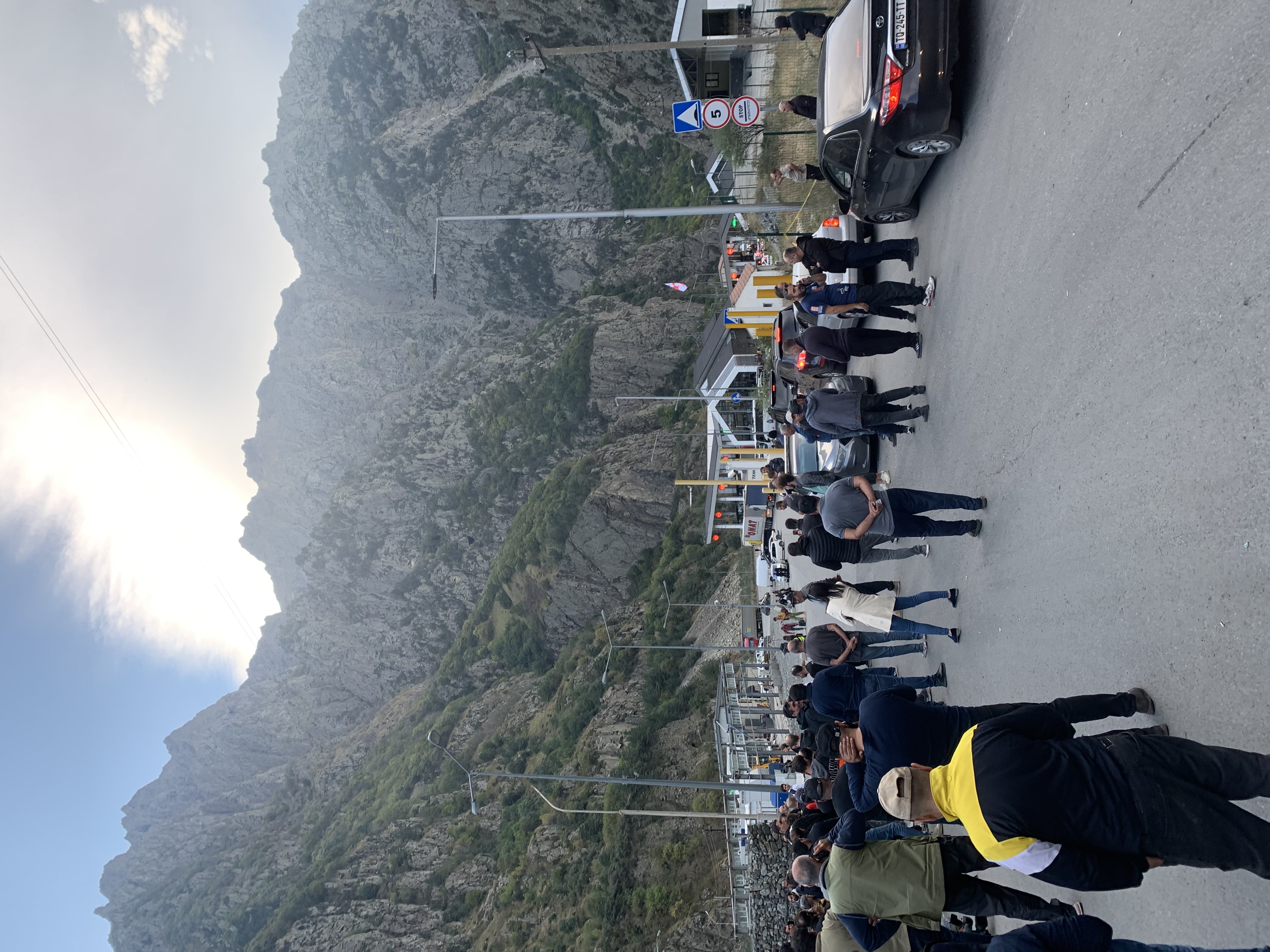 Kuznetsov is one of many to have entered Georgia on foot since North Ossetian authorities announced on September 27 that travelling by vehicle would no longer be permitted for crossing the border.

Some of the Russians arriving by foot arranged transportation ahead of time and jumped into cars as soon as they arrived. For others, dozens of taxi drivers stand near the border exit offering rides to Tbilisi for RUB10,000-15,000 ($172-258), the equivalent of two weeks' average wages for the country.

Those crossing the border by car can expect to wait in line for several days.

“We were waiting for five days,” says Alexander Kuzmin, who drove all the way from Moscow with his three friends. “We barely had enough food, but we also didn’t have much of an appetite.”

Kuzmin says that, while he and his friends prepared enough supplies for their journey, other drivers ran out of petrol while waiting in line. He says that local Ossetians were selling petrol cans for RUB700 ($12.4) per litre to those who were desperate.

“Now we’re going to Armenia. And then to friends in Turkey,” says Kuzmin.

Many say that taking a bike is the quickest way to cross the border.

“We passed through on bikes, which is super convenient and easy,” says Dima Fydorov. “I stood in line for maybe 20 minutes.”

Dima says that, although his views on the political situation in Russia are mixed, mobilisation was the final straw from him and so he decided to leave.

“This is a breaking point for so many Russians right now. Staying is dangerous,” Fydorov added.

In the background, members of the Georgian Droa movement stage a protest against what the organisers describe as an “unprecedented flow of Russian citizens entering Georgia,” that creates additional “risks to national security and the economy.”

“In surveys, most of you support the war. So why now are you leaving?” reads a sign carried by a protester draped in the Ukrainian flag. Another reads: “Russian deserters, you are not welcome.”

Within Georgia, some are calling on the government to close the border with Russia. Georgia’s United National Movement proposed introducing an "occupation fee" for Russian citizens. Levan Bezhashvili, a member of the party's political council, called on his fellow parliamentarians to unite around the initiative.

However, Georgia’s government has not yet indicated that it plans to close the border.

On the Russian side, North Ossetia's governor, Sergei Menyailo, announced on September 28 restrictions on cars coming from other regions in Russia. According to Menyailo, in the previous two days more than 20,000 people left Russia through the border with Georgia.

Meanwhile, Russian officials said that reservists attempting to leave the country will be handed their draft summons at the Upper Lars border crossing in North Ossetia. Videos posted on social media earlier this week show armoured vehicles and military trucks moving towards the border checkpoint to enforce the rule.

"At the border with Georgia there is a draft task force, including representatives of the military registration and enlistment office. At the border they are checking if a person is subject to military service and the draft. If there is information that a person is subject to the draft, then in this case he is given a summons," the TASS news agency quoted the head of the Republic of North Ossetia’s press service.

Samuel Ramani, a Russian foreign policy expert at Oxford University said that movement of Russian military vehicles towards key border checkpoints across the country could be “a step towards martial law even if the Kremlin has not yet imposed it nationally,” in a tweet.

Although it is unclear how much longer the build-up of cars, bikers and pedestrians at the Russia-Georgia border will continue, Pytor plans to keep transporting food and water to those who need it, and giving rides to new arrivals as long as Russians continue to flee the country. He is trying to convince his brother, who still lives in Russia, to do the same.

“They’ll come for everyone sooner or later. It’s just a matter of time,” says Pytor. “They’ll send you to the war and then you’re done for.”