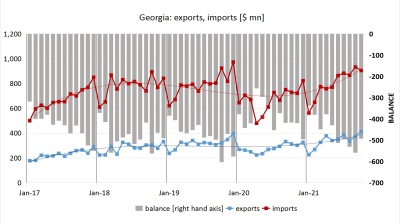 Georgia’s exports surged by 32% y/y to $411mn in October, and the growth compared to October 2019 was equally impressive at 29%, according to data released by the statistics office Geostat.

The country’s Minister of Economy Natia Turnava praised the performance, arguing that this is the result of the government’s import substitution policies.

Indeed the exports boast robust growth this year, but imports increased significantly as well in January-October: by 22.3% y/y (to $7.96bn, more than double the exports) and indeed by only 3% compared to the same period of 2019.

Detailed data available as of September reveals that even if the biggest contribution to the domestic exports in January-September (+26% y/y, to $2.17bn) was made by the ferro-alloys (+76% to $316mn) – which rose on higher prices – many other industries, mainly food processing and light industries, contributed as well.

Georgia’s trade gap in October and for the whole 10-month period of the year increased compared to 2020 (+18% y/y and +20% y/y respectively), but it was slightly smaller compared to 2019 (-18% y/y in October alone and -2.2% for the 10-month period). It is unclear whether this was an effect of weaker domestic demand, depressed by the crisis, or a result of the import substitution. Data suggest a combined effect, with the exports making the biggest part of the contribution.