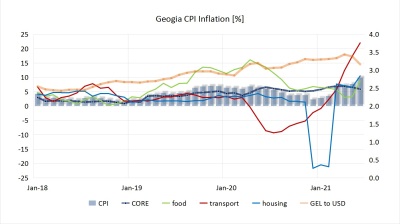 Georgia’s consumer price inflation came in at 9.9% year on year in June, a major 2.2pp rise from 7.7% y/y in the previous month, according to Geostat.

Core inflation excluding tobacco was 5.8% in June, also down from 6.9% in April.

Notably, the national currency has strengthened significantly in June versus the US dollar, to 3.16 GEL to USD from 3.38 in May and 3.44 in April, easing the pressures exerted by expected inflation.

The monetary board of the National Bank of Georgia (NBG) on June 23 left its refinancing rate unchanged at 9.5%, despite the “temporary” inflation that reached 7.7% in May – more than twice the 3% inflation target.

The upward revision of Georgia's regulated natural gas prices in July and the base effects of the subsidised utility prices in December-February will further exert upward inflationary pressures, the NBG conceded. Still, NBG expects average inflation this year to be 7% and hopes that headline inflation will return towards the target inflation rate by the end of 2022.