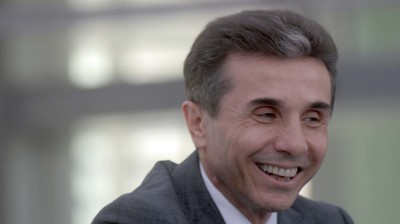 Bidzina Ivanishvili, a man with a finger in many pies, both business and political.
By Iulian Ernst in Bucharest August 13, 2019

More question marks have emerged over the future of a television station in Georgia that has a significant role in the country’s fervent politics. The new owner of Rustavi 2, which serves as Georgia's main opposition broadcaster, has said that he wants to sell it—and, ahead of the next general election which must take place by October 2020, whom he moves to sell it to will be watched very closely.

The broad expectation is that the country’s richest and most influential person, Bidzina Ivanishvili, who is also the chair of the ruling Georgian Dream party and a former PM, will attempt to capitalise on the developments—but not by taking over Rustavi 2. If it was made his own TV station, it would be worth nothing to Ivanishvili, political analyst Vakhtang Dzabiradze explained for Inter Press News. The takeover must be performed by an intermediary, he implied.

In recent years, Rustavi 2 has essentially been at war with Ivanishvili, sometimes seen as the de facto leader of Georgia. Nika Gvaramia, general director of the station until he was fired in late July, is known for delivering fiery speeches at anti-government rallies. He has used airtime to broadcast crude epithets in relation to Ivanishvili.

Verge of bankruptcy
The new owner of Rustavi 2 is Kabir Khalvashi, who is actually a former owner who re-gained control of the TV station through the courts. Quite unusually for someone who wants to sell an asset, Khalvashi has stressed that the TV enterprise is on the verge of bankruptcy and that insolvency procedures should be launched. In fact, Rustavi 2 is worth nothing, Khalvashi implied, while his lawyer added that his client would seek compensation from Gvaramia, who was fired by Khalvashi.

“Unfortunately, my financial ability to pull the company out of a deep crisis is not enough. Therefore, I would like to say openly and publicly that I am ready to talk to any interested person who will buy Rustavi 2, help it get out of the crisis and become a successful company,” Khalvashi stated.

His lawyer Paata Salia, who was appointed as CEO of Rustavi 2, said that former manager Gvaramia would be sued over damages caused to the TV station. Irrespective of the outcome of the lawsuit, the process will complicate Gvaramia’s plans to open a new TV station, which is expected to replicate the anti-government media outlet he managed before he was dismissed.

Salia gave an assurance that the activity of Rustavi 2 would proceed apace, a move that might persuade its employees to not leave in favour of posts at Gvaramia’s would-be new TV station.

“We will certainly appeal to the court of appeal for damages incurred by the company's CEO over the years due to his fiduciary obligations,” Salia said.

The fate of Rustavi 2 remains even more uncertain as the founders of it are still pursuing court action to request that ownership of the company is granted to them.

Davit Dvali and Jarji Akimidze, the founders, claim that they were removed illegally from the company by the regime of Mikheil Saakashvili and that now the party chaired by Ivanishvili wants to make it even more complicated for them to regain ownership.

“We would like to warn potential applicants for the competition. We declare with full responsibility that they cannot become bona fide purchasers. This television station was illegally seized and the founders are struggling to get it back. The [situation] has been confirmed by the Office of the Chief Prosecutor, who has been investigating the matter since 2012 and identified [the founders] as a victim in 2015. The investigation is still ongoing,” a statement of the two reads.