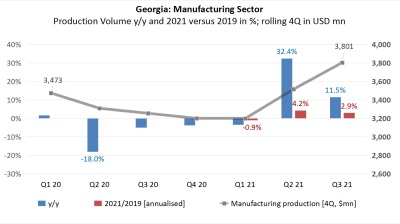 By Iulian Ernst in Bucharest December 7, 2021

The nominal value of the production generated by Georgia’s non-financial companies rose by 29% y/y in Q3 to GEL15.0bn ($4.81bn), the statistics office Geostat announced.

The growth rate of the production value expressed in US dollars is 30%.

Compared to the same quarter of 2019, before the crisis, the production value expressed in local and foreign currency increased by 18% and 11% respectively.

But a large part of the impressive growth rates reflects higher prices of food and metal in the third quarter this year, compared particularly to last year and partly compared to 2019. Geostat does not provide industrial production volume indices that would not include such effects.

The core manufacturing industries performed better than the average, since the average includes sectors such as accommodation, entertainment and arts which are still operating at very low capacity.

The value of the production generated by the manufacturing companies, expressed in local currency, surged by nearly one third compared to both Q3 last year and Q3 of 2019, to GEL3.63bn ($1.16bn) in the third quarter of 2021.

The high prices’ impact was particularly visible here: Industrial prices in the manufacturing sector rose by 18.2% y/y in Q3, eating most of the 32% y/y nominal advance.

However, even discounted for the manufacturing price inflation, the production value in Georgia’s manufacturing sector still expanded by a real 11.5% y/y. This figure includes an important base effect, since the manufacturing companies were operating at low capacity during 2020.

Compared to the third quarter of 2019, the production value in the manufacturing sector expanded by an annualised real rate of 2.9% per annum.

The two-year growth rate, calculated in order to avoid the base effects caused by the lockdown in 2020, was even stronger in the second quarter of this year when it was +4.2% per annum. 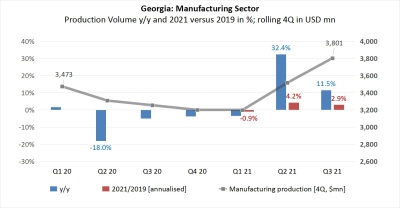 Romanian stock exchange reaches new record as BET-TR rises 5.7% ytd
2 hours ago
Population decline to take Emerging Europe back to the early 20th century
3 hours ago
Russia’s international reserves up $3.6bn in one week to $571bn
13 hours ago
CPI inflation in Moldova hits 33.6% y/y in July
1 day ago
How do high gas prices push up the cost of power?
1 day ago