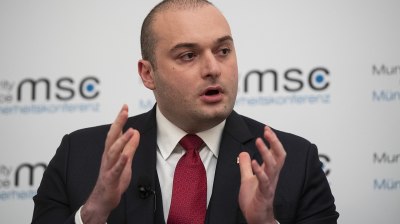 Mamuka Bakhtadze. Gone after a year, and ahead of next year's scheduled general election.
By Iulian Ernst in Bucharest September 3, 2019

Georgia’s PM Mamuka Bakhtadze on September 2 announced in a facebook post that he had resigned because he had “fulfilled my main mission as the prime minister of Georgia”. Views differ on what his mission was, though.

Bakhtadze was appointed in June 2018 after predecessor Giorgi Kvirikashvili stepped down citing “disagreements on fundamental issues” with Georgian Dream (GD) ruling party chairman, billionaire oligarch and ex-PM Bidzina Ivanishvili—the man often described as the small nation’s de facto leader. It was later understood that Kvirikashvili was dismissed because he helped TBC Bank co-founder Mamukha Khazaradze take the lead in the Anaklia deep-water port project, the national flagship infrastructure project on the Black Sea coast under the Anaklia Development Consortium (ADC) said to have the potential to become a game-changing transit hub between Asia and Europe. Khazaradze was at the time emerging as the political rival he has by now become for Ivanishvili, despite being hit by prosecutors’ allegations of money laundering activities more than a decade-old and undermined by the government's ambiguous position on progressing the Anaklia project.

It is possible that Bakhtadze’s sudden resignation could also be linked to the approach he took to the port project, which Ivanishvili follows very closely as Khazaradze strives to fulfil the ADC agenda despite the obstacles, including anxieties that the government could swing behind an alternative port project at Poti.

Political vehicle
Khazaradze lately set up a political vehicle to face Ivanishvili in the general election scheduled for next year. What is being seen as an attempt by the authorities to silence the main anti-government TV station, Rustavi-2, meanwhile, has ended with the editorial team shifting to a new broadcaster with the same orientation. Finally, Georgia’s traditional big foreign nation backer, the US, has warned that “there will be a reaction” if the South Caucasus country mishandles Anaklia.

GD discussed over the weekend the decision to reshuffle the government. But no decision was disclosed immediately after the discussions, with the media invited to wait for a prime minister’s statement on the Monday.

“A strategic development framework has been created, implemented and therefore I decided to resign because I believe that I have fulfilled my mission at this stage”, Bakhtadze wrote in his resignation statement the following day.

Business circles, meanwhile, are not exactly thrilled with what the government’s strategic development framework has actually achieved.

Fady Asly, chairman of International Chamber of Commerce (ICC) Georgia, took an even tougher line as he expressed his disappointment with all the prime ministers appointed by Ivanishvili’s GD.

“Under your watch, total direct foreign investment has decreased to the level of 2006. Under your watch, criminality has increased to such an extent that in certain areas of the city [Tbilisi] people are now scared to walk at night in the streets. Under your watch, corruption has exploded, and we read every day in the press the name of new government officials arrested for corrupt deals, probably for having turned their back on you,” Asly wrote in an open letter this August.

But the outgoing prime minister stressed that education was the main achievement of his term, mentioning that the budget of the education ministry was now set by law at 6% of GDP.

“Education has the most important role in the… strategic development framework, and I have always said that the emergence and realisation of education as a national idea was the main motivation for me to enter public policy,” he wrote in his resignation post.

Gia Volski, leader of the parliamentary majority, noted that the new candidate for the position of PM was set to be introduced on September 3, after the completion of a session of the Political Council.

According to a rumour circulated since September 1, when the GD leadership met to discuss the reshuffle they concluded that Bakhtadze would be replaced by Interior Minister Giorgi Gakharia—one of the closest collaborators of Ivanishvili. But Gakharia came under fierce criticism after the aggressive riot police intervention in the mass protests on June 20-21 against the government, prompted after a visiting Russian lawmaker was allowed to make an address from the speaker of parliament’s chair. GD officials rejected such rumours and repeated that the designated prime minister would be announced on September 3.