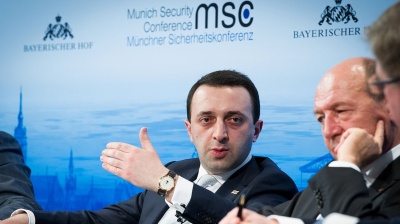 Some saw the reappointment of PM Irakli Gharibashvili in February as a signal that Georgian Dream is switching fully to hardline mode.
By Neil Hauer in Tbilisi August 4, 2021

The Caucasus republic of Georgia is used to good press. The country’s medieval monasteries, spectacular mountains and eyecatching cuisine have made it an increasing fixture in travel magazines over the past decade. Since 2003’s Rose Revolution, when popular protests brought the rabidly pro-Western Mikheil Saakashvili to power, the country has been a darling of the West, regularly praised by US and European politicians as a ‘beacon of democracy’ in the region and as an anti-Russian bulwark.

That seems to be changing. After years of democratic backsliding, a disastrous July has left the country’s political development in question. With the ruling Georgian Dream party openly lambasting its Western partners, there is a real sense developing in Washington and Brussels—not to mention in Georgia itself—that the country’s Western honeymoon may be over.

The erosion in Georgia’s democratic path has been worsening for several years. According to rankings compiled by Freedom House, political freedoms in the country dropped by four points (from 27/40 to 23/40) from 2017 to 2021, driven primarily by increasing electoral irregularities and a greater willingness by police to forcibly disperse rallies. The latter was on full display in June 2019, when police used water cannons and rubber bullets against protesters for the first time in seven years. Electoral conduct, meanwhile, took another blow during last autumn’s parliamentary election, which Freedom House characterised as being marred by “significant shortcomings”, including “voter intimidation, misuse of administrative resources and vote-buying”.

July, however, was something else entirely. The immediate trigger was a planned Tbilisi Pride march on July 5, the latest in a near-annual saga to which the country’s primary religious authority, the Georgian Orthodox Church, remains staunchly opposed. But none of the previous events descended into the pogrom-like atmosphere seen this year. Far-right mobs swarmed the streets in protest; failing to find any LGBTQ activists, they instead turned their ire on journalists. When the dust cleared, 53 journalists and cameramen had been beaten—one, Lekso Lashkarava, so badly that he died of his wounds later.

The government’s conduct in the weeks that followed was focused on blaming the opposition for the outcome of the rally and actively rebuffing calls by the EU and US to find and punish those responsible for the violence. The interior ministry stated that a drug overdose was the likely cause of cameraman Lashkarava’s death, a move that earned a reproach from the US embassy in Tbilisi.

Going yet further, Georgian Dream apparently decided this was the right moment to flaunt the EU-brokered political agreement it signed with the opposition on April 19, first appointing six new Supreme Court judges before withdrawing from the agreement altogether on July 28.

Now, for the first time, Western governments have hinted that they might punish their longtime Georgian partners for their continued parade of illiberal actions.

The US was first to do so, with State Department spokesman Ned Price implying on July 14 that targeted sanctions aimed at Georgian Dream officials could be forthcoming. Later that same day, the EU suggested in a statement that Georgia might not receive the full second tranche of funding under the present EU-Georgia financial aid project.

For those in Georgia itself, the past month has been nothing short of disastrous.

“It’s the last stage of developments, in regards to Georgian Dream,” says Egor Kuroptev, South Caucasus director for the Free Russia Foundation. “The reappointment of [Prime Minister Irakli] Gharibashvili in February was a signal that [Georgian Dream] is switching fully to hardline mode. Everyone knows what kind of guy he is,” he said.

Kuroptev believes that the violence on the day of the planned pride march was no accident.

“[The violence on] July 5 was a demonstration by Gharibashvili that we are controlling these forces and we can use them,” Kuroptev said. “When you have 53 journalists beaten, it’s clearly a direct attack, with the message of, ‘we are here, we won’t listen to what the West says, we don’t care,’” he said.

The situation is unlikely to improve, in his estimation.

“Now that they [Georgian Dream] have started down this path, it will be very difficult not to keep going,” said Kuroptev. “These events could result in real prosecution for them if they lose power, and they know it, so they are doubling down. You can see it in their statements—every day since July 5, they are escalating,” he said.

For Kuroptev, the tepidness of Western reaction to the events—still limited to statements only, however harsh—is testament to how awkward the situation is for those in Brussels and Washington.

“The US and EU have always known that this government isn’t democratic, but they have invested in this country and its institutions for 20 years,” Kuroptev says. “After that amount of time, to have to say, ‘Georgia isn’t democratic, it’s not on the path to Nato or the EU,’ is very painful. They were always scared to punish the [Georgian Dream] government they have worked with for the past nine years, but there is a time when you have to wake up, and that time is here,” he said.

In Washington, the July 5 violence and its aftermath have been met with alarm and an increasing sense of exasperation—a word the US embassy in Tbilisi itself used in an unprecedented riposte to the GD administration on July 29.

“There is a lot of frustration with Georgia right now in the US,” said Paul Stronski, a senior fellow working on Georgia at the Carnegie Endowment’s Russia and Eurasia Program. “Almost 20 years after the Rose Revolution, Georgia remains in an unsteady democratic state. It seems to go from one perennial crisis [to the next] with institutions not working as they should,” he said.

Recent hostile remarks by Georgian Dream officials towards the US and EU have also raised concerns.

“There are a lot of questions about this hostility and the anti-Western rhetoric that has come out of some sectors of GD and the Georgian church,” said Stronski. “The Georgian government’s failure to protect protesters—even protesters with which it disagrees—is a basic failure of a democratic government,” he added.

Similar views are emerging in Brussels.

One European Parliament insider working on Georgia, speaking on condition of anonymity, said that Georgian Dream has grown “more arrogant” in recent years.

“They started taking us for granted,” said the insider, describing the close alignment of Georgian Dream with the Socialists & Democrats (S&D) political group of the EU. “Now people are losing patience. There are an increasing number of people who feel it’s too much, who want to expel [Georgian Dream] from the Socialist family,” they added.

The lack of accountability for any perpetrators of the July 5 violence, as well as the seemingly failed April 19 deal brokered by the EU, have further hampered relations.

“Right now, the perception towards Georgia [in Brussels] is pretty miserable,” the insider said. “We feel that we’ve lost our leverage, but people are also unsure of what could have been done differently, and here we are.”

Despite this frustration, neither observer, in Brussels or Washington, saw the possibility of harsh punishments against Georgia or Georgian Dream as particularly likely.

“Anything is possible, but I doubt it,” said Stronski, in response to a question about potential targeted US sanctions against the Georgian Dream leadership. “I think the threat of sanctions...is far more potent than actual sanctions. I do see the likelihood of curbing US assistance to [parts] of the Georgian state as certainly probable, however,” he added.

“As usual, the EU is still trying to muddle through, especially now with the summer recess,” the insider said. “I think the suspension of funding is unlikely to happen, given that people here think in geopolitical terms—that if we cut off Georgia, then what, then they go back to Russia. But the withdrawal from the [April 19] agreement was very damaging, so if the US imposes cuts, we could see something similar [from the EU],” they added.

Meanwhile, for civil society in Georgia itself, each passing week—and the new inflammatory rhetoric and actions from Georgian Dream that accompany them—brings yet further concerns.

“If Georgian Dream stays in power for another year, I am very afraid that we will lose all that has been built in this country, whatever democratic advances have been made,” said Kuroptev. “Even worse, they can destroy all our relations with our Western partners, to the point that the EU and US no longer care,” he added.

“The West needs to decide,” Kuroptev finishes. “Are they for the people of this country, who vote for them [in terms of EU and Nato accession] every time? Or do they still want to play nice with this criminal government that openly tells them to go to hell?”

Russia’s Team Spirit has triumphantly lifted the Aegis of Champions. The team of five youngsters – the oldest of them only 23 years of age – has won $18.2mn, the biggest prize in eSports.

After ranking second in the EU two years ago, production has now sunk back amid rising costs and legislative hurdles.