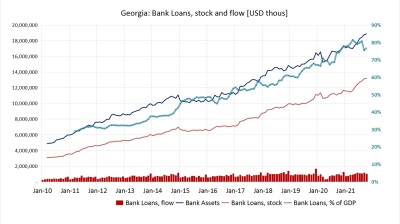 Georgia’s banking system, dominated by TBC and Bank of Georgia, has expanded the volume of its aggregate assets by 11% y/y to GEL59.6bn ($18.86bn) at the end of October, driven by the robust 15% y/y advance of the loan portfolio to GEL41.7bn ($13.19bn), according to data provided by the National Bank of Georgia (NBG).

A broader picture shows that the expansion of the country’s banking system’s over the past decade has not been correlated with (or has not supported) similar expansion in the real sector. The robust wage remittances (reflecting Georgians’ economic activity abroad) and certain improvements in the country’s foreign trade have fuelled the banking system’s expansion.

Compared to October 2019, before the crisis, the volume of assets and loans surged by 29% and 36% respectively (21% and 27% respectively, for the volume expressed in US dollars).

The figures reveal the robustness of the Georgian banking system and its continuous expansion over the past decade. However, it comes in sharp contrast to sluggish economic growth – which questions the ultimate utility of the financial system’s development.