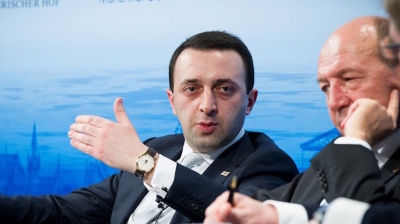 Georgian Prime Minister Irakli Garibashvili: "We will wait until June 23-24 to understand how our European, real friends really treat our people and our country."
By Cavid Aga in Baku June 13, 2022

Georgia's ruling Georgian Dream party has signalled it will make a tough response if the European Commission refuses to grant Georgia candidate status at its summit next week.

Georgian Prime Minister Irakli Garibashvili said that if the decision to grant the country the status of an EU candidate is "unfair", he will "uncover everything", he told journalists during a visit to the construction of a new Sports Palace in Tbilisi on 11 June.  "The status is of course important, but we will wait until June 23-24 to understand how our European, real friends really treat our people and our country," he said.

International media reported at the weekend that Georgia would not be given candidate status to start negotiations on EU accession at the June 23-24 summit, while Ukraine and Moldova would be allowed to go forward, joining North Macedonia, Albania, Montengro, Serbia and Turkey. The ruling Georgian Dream party has been criticised for eroding  democracy since it took power in 2012.

The European Parliament recently passed a resolution calling for sanctions on Bidzina Ivanishvili, Georgian Dream's founder and its former prime minister, for his alleged links with Russian President Vladimir Putin's regime. Ivanishvili made his fortune in Russia before Putin's rise to power. Georgia has refused to join sanctions on Russia.

Garibashvili called the resolution "biased" and criticised the MEPs, who, according to him, showed irresponsibility and insulted the Georgian people, "80% of whom are in favor of uniting our country with Europe". Garibashvili added: “Over the past nine years, we, the team left by the same Bidzina Ivanishvili, and his party [Georgian Dream], have drawn up all the important steps of the strategic document, which actually brought us closer to Europe,” he said.

Georgia submitted the second part of the EU questionnaire on 10 May, amid the Russian invasion of Ukraine. The Georgian government handed over the first part of the questionnaire to the European Union on 2 May. Georgia and Moldova applied for EU membership on March 3 alongside Ukraine. Prior to this, the Georgian government intended to formally apply for membership in 2024.

Irakli Kobakhidze, Georgian Dream head,  commented on the candidacy on 9 June. "We hope that when Georgia, Ukraine, and Moldova become members of the European Union, we will have a different European Parliament … [one] immune from the influence of 'fake [news]', a defender of true European values," he said according to Civil.ge.

Commenting on rumors about EU not granting candidacy status, he said that the opposition’s calculation was "to first denigrate Georgia in Europe and now to take advantage of the public outcry if Georgia fails to secure the EU candidacy" and to engineer a "palace coup by the United National Movement". He openly blamed Saakashvili and his supporters. "The end of all this is Georgia’s engagement in war," he said reportedly.

Dmitri Khundadze, a Georgian Dream MP, said: "If Georgia receives the status of an EU candidate with unjust commitments like the unjust allegations reflected in the resolution, then the country should give a fair refusal in response" on 10 June. According to him, "dignity is above EU candidacy".

This statement brought immediate reactions from Public Defender Nino Lomjaria and  First Vice Speaker of the Parliament Gia Volski (who is also from Georgian Dream). While Lomjaria replied to Khundadze that "Georgian people have already decided on a European future," Volski commented that Khundadze's statement "is not the official position of the party or the political team".

UNM party chairman Nika Melia accused Georgian Dream of "preparing the ground" for refusal, "which the Georgian Dream desperately needs". "Now they are rubbing their hands and doing everything they can to make Europe say no," he said.

President Zurabishvili also criticized Georgian Dream's reaction to the EP resolution during her recent visit to Brussels. "Unfortunately, such a resolution was adopted, and even more unfortunately, this resolution was followed by comments from the government team, which does not really allow me to effectively defend our candidacy today," she said. Several NGOs, including Open Society Foundation, Atlantic Council, Democracy Index, Human Rights Center also released a joint statement criticising Georgian Dream for its reaction.