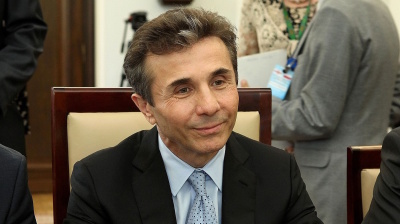 According to Forbes, Ivanishvili has a net worth of $4.8bn, making him Georgia’s wealthiest citizen. / Michał Koziczyński
By Mack Tubridy in Tbilisi October 4, 2022

Georgia’s parliament has begun work on a de-oligarchisation bill that the opposition says will be used to target their business supporters, rather than the country's most famous oligarch, Bidzina Ivanishvili, founder of the ruling Georgian Dream party.

Georgian Dream party MP and chairperson of the parliamentary Legal Issues Committee, Anri Okhanashvili, discussed the de-oligarchisation bill during a press briefing on October 3.  Okhanashvili told journalists that the Georgian Dream ruling party intends to use Ukrainian legislation as its model for the new bill, with the difference that in Georgia the parliament will be responsible for compiling a list of potential oligarchs. In Ukraine, the presidential administration compiles a list.

When asked by journalists whether Ivanishvili,  the country's so-called “secret ruler,” is likely to be included on the list of oligarchs, Okhanashvili said that “this draft law, physically and objectively, cannot apply to Bidzina Ivanishvili”.

As Radio Free Europe/Radio Liberty’s Georgian service reports, the bill contains several guidelines for defining an oligarch. This includes the possession of assets worth at least $85mn, as well as the funding of political parties and media.

The opposition believes that the de-oligarchisation law will be used to punish opposition financiers and to protect the interests of Ivanishvili. Although MPs from Georgian Dream claim that they are implementing EU recommendations, the opposition views the bill as an instrument for potential political repression.

According to Forbes, Ivanishvili has a net worth of $4.8bn, making him Georgia’s wealthiest citizen.    Ivanivshili served as prime minister of Georgia in 2012–2013. After that, he announced his retirement from politics. But in 2018 he formally returned to Georgian Dream. About three years later, he again issued a letter declaring his “final retirement” from politics.

However, many in Georgia regard Ivanishvili as the informal arbiter of major political decision making in the country, and both current and former members of government have said that personnel decisions are made directly with the participation of Ivanishvili.

Back in September, Ukraine's anti-corruption agency argued that Ivanishvili should be sanctioned for his alleged ties to Russia's military campaign against Ukraine. The agency claims that Ivanishvili has close ties with and has lobbied for the interests of influential Kremlin-allied Russians, including Vladimir Yevtushenkov, a Russian businessman, Georgy Poltavchenko, Saint Petersburg's former governor, and Russian MP Anna Kovychko.