Germany hands over its Novichok investigation data to OPCW 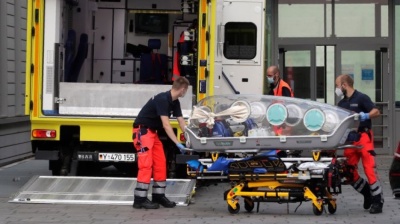 Germany has handed over all the data proving Novichok was used to poison opposition activist Alexei Navalny to the Organization for the Prohibition of Chemical Weapons (OPCW)
By Ben Aris in Berlin September 10, 2020

Germany has handed over all the data related to its investigation into what agent was used to poison anti-corruption blogger and opposition activist Alexei Navalny to the Organization for the Prohibition of Chemical Weapons (OPCW).

"The test results have been handed over to the organisation [OPCW - TASS]. Russia is a member of this organisation," a spokesperson for the German Defence Ministry said in a statement on September 9.

Angela Merkel unleashed a storm when she announced that a top German military lab had shown the toxicological tests using samples from Navalny had revealed "unequivocal proof of a chemical nerve agent from the Novichok group" had been used to poison the opposition activist.

"It is shocking information about the attempted murder by poison of one of Russia's leading opposition members," said Merkel at a news conference, using some of the most aggressive rhetoric she has ever used to condemn the attack. "This means that Alexei Navalny is a victim of a crime. It was an attempt to silence him. I condemn this in the strongest possible terms on behalf of the entire German government. There are very serious questions now that only the Russian government can answer, and must answer,” she added.

She went on to suggest that sanctions on Nord Stream 2 gas pipeline could not be ruled out unless the Russian government co-operated in the investigation “within days” but stopped short of explicitly saying the project would be halted. Merkel has received a lot of flak for backing the project that will by bypass Poland and Ukraine, saying it is an “economic” project and should not be linked to the political problems between the two countries, although that stance has been weakened by her latest comments. Pressure on Merkel to nix the project has been mounting among German politicians as relations between Moscow and Berlin drop to a new low.

Now that Germany has released the data to the OPCW the government regards its obligations fulfilled. German Government Deputy Spokesperson Martina Fitz noted that in the wake of this step, Berlin does not see the conditions for Germany to hand over its conclusive evidence to Russia in relation to Navalny’s case. "We maintain our position, calling on the Russian side to provide information [on Navalny]," she said.

Kremlin Spokesman Dmitry Peskov said later that Russia is ready for comprehensive co-operation with Germany, if the data is shared, but highlighted that before Navalny was transferred to Berlin, no toxic substances had been found in his system by Russian doctors attending Navalny.

That the announcement that the data has been handed over the OPCW is important, as Russian media has been making hay out of the fact that the German government has not yet shared the findings of their investigation with Russia’s General Prosecutor’s Office (GPO).

The state-funded international broadcaster RT in particular has been actively trying to muddy the waters and reporting on the "mystery illness" that afflicted Navalny. It has been able to do this as the conclusive proof the Germans claim to have has until now not been shared. RT carried reports highlighting the fact that despite repeated requests the German government has failed to share the information, which has stymied the launch of an investigation into what happened to Navalny.

The GPO has taken the line that currently Russia has no information that show Navalny was poisoned and so can’t launch an investigation. The doctors in Omsk claim that they carried out tests when Navalny’s plane made an emergency landing there on August 20.

On the basis of these reports the GPO said it doesn’t see any grounds for opening a criminal case into Navalny’s poisoning in a press release on August 27. After these statement’s Merkel’s announcement came as a bomb shell.

However, the RT reporting is disingenuous and designed to muddy the waters around yet another extremely embarrassing case for the Kremlin.

Novichok is a military-grade chemical weapon that was developed in the Soviet Union in the '70s and '80s. Russia has signed up to the chemical weapon ban treaties that are overseen by the OPCW and there are a number of protocols associated this its membership in the body. Among them is that in the case of a chemical weapons attack – irrespectively if it happens on a Russian national on Russian territory – the OPCW is the relevant authority and all data should be submitted to the OPCW, which becomes the responsible authority for overseeing any subsequent investigations, according to bne IntelliNews’ diplomatic sources.

The Russian government claims that Germany is blocking their access to the German data, but as a member of the OPCW Russia has access to the information and has only to apply to the OPCW for it. For Germany to share the data with Russia directly is a breach of protocol under the OPCW rules.

Germany has failed to make this point clear in its press briefings and its poor management of the PR surrounding the affair has opened it up to the charge of hypocrisy. Germany complained loudly that Russia refused to share intelligence following the killing of a Russian national in the Tiergarten park in Berlin in June. The German government accused the Russian government of being behind the murder and expelled two Russian diplomats over the incident. Now the tables are turned and Russia is claiming the Germans are the ones that won’t share their intelligence.

More details came out on the nature of the poison, which is reportedly a unique form of the Russian nerve agent that has never been seen before and is especially virulent.

The chief toxicologist at the Siberian hospital who was the first to treat Navalny, Alexander Sabaev, said he initially suspected poisoning and that he and his colleagues treated him with the emergency drug atropine, Reuters reported. The initial correct diagnosis and use of the correct drug that saved Navalny’s life belie the doctors’ later claims that they had found no evidence of poisoning.

Some have speculated that the current mess is a result of the plan to kill Navalny going wrong thanks to the prompt action of the pilot and Sabaev. On the morning of August 20, Omsk Airport received a bomb hoax call that should have shut the airport down, but Navalny’s pilot managed to land anyway. And Sabaev's quick analysis of the use of a Novichok nerve agent was also not to be expected. Thirdly, the fast dispatch of a German ambulance airplane to medevac Navalny was also not a given. Had Navalny’s Russian scheduled flight gone on to Moscow, experts believe he would not have survived. Once in Moscow the Kremlin would have taken procession of both Navalny’s body and the narrative and the outcome could have been very different.

On September 7, the German Charité hospital where Navalny is being treated under heavy guard said he had been brought out of a coma and that he is gradually being taken off artificial ventilation.