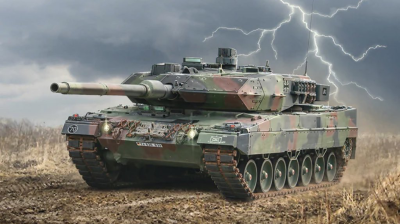 Germany's Leopard 2 tank is seen as a potential game changer in the Ukraine war. / bne IntelliNews
By Wojciech Kosc in Warsaw January 23, 2023

Poland has been pushing Germany to send its tanks to help the Ukrainian war effort – something that the authorities in Kyiv have long said is necessary to push back the Russians.

Countries that have the Leopards in their stock need Germany’s approval to send them to fight abroad, a commitment that Berlin has also been unwilling to make up to now.

Under intense pressure from Nato allies, however, Germany’s position appears to be shifting.

"For the moment the question [about sending tanks to Ukraine] has not been asked, but if we were asked we would not stand in the way,” Baerbock told France’s LCI TV in an interview according to Reuters.

Germany’s Chancellor Olaf Scholz said earlier that his country would only green light sending its tanks to Ukraine if Nato’s biggest armed force, the US Army, would commit to sending its Abrams tanks as well.

So far, the US has said no to sending the Abrams tanks to Ukraine. That has been making Nato’s European member states also hesitant about committing their own equipment.

Baerbock’s statement now opens a possibility for at least some of the allied countries not to wait for Berlin to okay sending its Leopards but move in with their own delivery of the German-made tanks.

Poland and other CEE countries have grown irritated by what they see as Germany’s blocking a stronger military response to Russia’s invasion of Ukraine.

“We will not stand by idly and watch Ukraine bleed to death. If we don’t get German agreement on the Leopards, we will build a ‘smaller coalition’ of countries ready to donate some of their modern tanks to a fighting Ukraine,” Poland’s Prime Minister Mateusz Morawiecki tweeted on January 22.

Germany has been the biggest supplier of weapons to Ukraine in monetary terms in Europe; however, it has sent only defensive weapons. Only last week, Germany denied Kyiv's request for tanks at the Nato conference at the alliance’s airbase in Ramstein, even though the new German Defence Minister Boris Pistorius said that a final decision had yet to be made.

Pistorius also instructed the German Armed Forces to assess how many and which Leopards it could send when the decision comes through. "I'm very sure there will be a decision in the short term, but I don't know how the decision will look," Pistorius said.

President Andrzej Duda announced that Poland is ready to send Leopard tanks to Ukraine during a visit to the western Ukrainian city of Lviv last week, but it later transpired that not only had he not cleared the decision with Berlin, but that Warsaw had not even put in an official request for permission. Poland is reportedly ready to donate a company of Leopard 2 tanks (around 14) with 1,000 pieces of ammunition.

Duda, speaking at Davos last week, repeated his calls for tanks for Ukraine and said the West should send 100 Leopards, which would change the course of the war in his opinion.

Finland has also raised the possibility of sending some of its Leopard 2 tanks.

The UK has also said it is ready to send a squadron of UK-made Challenger 2 tanks, around 14 lighter-type vehicles.

Meanwhile, more intense fighting appears to have broken out in Ukraine’s southern region of Zaporizhzhia, where Russians are allegedly staging an offensive.

The Ukrainians say that the Russians have so failed to improve their positions in Zaporizhzhia.

Polish proposed ban on Russian rubber may give the European tyre industry a flat
3 hours ago
Prague to have a new municipal government after record-long negotiations
8 hours ago
Party congresses of Hungarian opposition demonstrate deep divisions
8 hours ago
At least 500 dead after huge earthquake hits Turkey, Syria in early hours
8 hours ago
Turkish minister tells US ambassador ‘Take your dirty hands off Turkey’ as sanctions sparks fly
14 hours ago