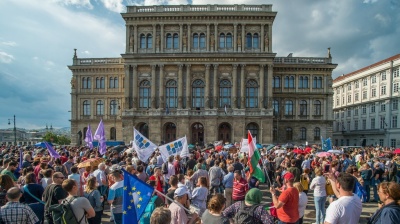 Protest in front of the MTA headquarters in Budapest
By bne IntelliNews June 6, 2019

The government submitted a bill to parliament on June 5 that would relocate the network of research institutions of the Hungarian Academy of Sciences (MTA) to a government-run body. The bill also stipulates the takeover of the Academy's property, which may violate the Constitution.

The Innovation and Technology Ministry has been in talks with the academy for months over the future of the network of research institutions, but talks stalled after the general assembly of MTA. The quorum approved a resolution in May that the network of research institutions should remain with the academy, adding that the ministry's proposals relating to MTA's property are unacceptable and unconstitutional.

The government last year decided to reroute funds from MTA, and in January it launched tenders for which researchers of MTA could run.

The government argues that MTA’s research network, doing mostly basic research, is not efficient and Hungary's entire R&D should be overhauled.

The MTA said earlier that it supports efforts to enhance Hungary’s RDI performance, however, this aim can only be reached if the research network of the academy is preserved. The MTA’s research network employs 5,000 people, including 3,000 researchers.

The bill lists 17 MTA institutions that would become part of the Eotvos Lorand Research Network (ELRN) a government-funded body with separate budget chapter assigned to it.

The academy has said it wants them to remain under its aegis, but the ministry has pressed for their separation from the MTA. "Shaping the general direction of innovation and scientific research funded with public monies and undertaken for the public benefit is the common task of the scientific community, institutions representing citizens, players in the world of business and the civil sphere," according to the bill's justification.

On Sunday, a civil initiative by members of the research institutes organised a demonstration at the headquarters of the prestigious building close to the Chain Bridge protesting against the nationalisation of MTA's network.

MTA chairman Laszlo Lovasz hoped that negotiations with the government would continue.

"We must not lose sight of our main goal: for researchers of the network of institutions to be able to continue their research in Hungary, free of political pressure, free to pick topics [of research] in line with international norms, with predictable material support," he said in a recording to protesters on Sunday.

He was invited to a parliamentary committee hearing on Wednesday, but the Fidesz-led majority adjourned the meeting.

Figures revealed from the 2020 budget bill does not bode well for researchers hoping that MTA could retain its independence. In the bill, the government earmarked a smaller budget for the institute with revenue of HUF7bn (€21.8mn), down 84% from the 2019 target, and expenditures of HUF117bn, 70% under this year's targets.

In the 2020 budget bill, the government raised the budget for the National Research, Development and Innovation Fund by 75% to HUF138bn.

The provisions of the proposed legislation would come into force between August 1, 2019 and January 1, 2020.

Flagship holding of Hungary’s number one oligarch wins streak of state orders during pandemic
Hungary’s Wizz Air uses crisis to aggressively take on competition by expanding to new routes
LONG READ: The Growers - a handful of countries in New Europe are coping with the coronacrisis and are still expanding