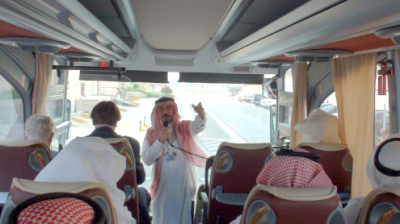 Saudi Arabia has chosen a curious time to declare itself open to foreign tourists.
By bne IntelliNews September 30, 2019

Saudi Arabia has taken some pretty bad economic hits from the drone and missile attacks, widely blamed on Iran, that wiped out half of its oil production capacity and the latest severe blow came on September 30 as rating agency Fitch downgraded the kingdom’s credit rating to A from A+, citing rising geopolitical and military tensions in the Gulf.

With Riyadh perhaps surprised and underwhelmed by US President Donald Trump’s restrained response to the pre-dawn September 14 drone and cruise missile attacks on Washington’s big Gulf ally, analysts have questioned whether the Saudis might move to at least ease strained relations with Tehran and that prospect appeared to become that much more likely on September 30 when Iran announced it had received messages from Saudi Arabia through third countries.

Ali Rabiei, spokesman for Iranian President Hassan Rouhani, told journalists that Tehran welcomed the communication but that a "public message" from Riyadh such as on ending "the attack on Yemen", where Saudi-backed forces are fighting the Iran-aligned Houthis, was required as well.

"If Saudi Arabia is really pursuing a change of behaviour, Iran welcomes that," Rabiei said. "Part of the Hormuz peace plan [as communicated at the United Nations General Assembly in New York last week by Rouhani] is also working with neighbours like Saudi Arabia, so Iran welcomes the process."

Rabiei did not comment on the contents of the messages from Saudi Arabia, but news of them broke around about the same time the kingdom’s de facto leader Saudi Crown Prince Muhammad bin Salman warned in US television interview that oil prices could spike to "unimaginably high numbers" if the world doesn't come together to deter Iran. At the same time, the prince, known as “MBS”, added that he preferred a political solution with Iran to a military one.

Saudi Arabia has said that it will regard the attacks on its oil facilities as "an act of war" if an ongoing investigation determines that they were launched from Iranian soil. Iran, which denies being behind the strikes, which it claims were the work of the Houthis, regards Riyadh as complicit in the “economic war” it says the US is waging against the Islamic Republic with crushing sanctions. There is anger that some oil sales lost by Iran because of the sanctions have gone to arch-rival Saudi Arabia.

Even prior to the attacks on the oil facilities—an oilfield and the world’s largest oil processing facility—the United Arab Emirates (UAE), clearly worried at how hard business hubs such as Dubai would be impacted by a growing military showdown with Iran, had shown signs of stepping back from a close Iran foreign policy alignment with allies Saudi Arabia and the US. The UAE is even said to have lost various forms of valuable business with the Iranians due to the sanctions, brought in by the US to try to force Iran to even more tightly restrict its nuclear and ballistic missile programmes and end its support for various militias across the Middle East, opposed to Israel and/or certain Arab nations.

Impact on value of Aramco IPO
Not only have the attacks now resulted in the Fitch downgrade, they have also likely erased a substantial part of the potential $100bn that Saudi Arabia’s state-owned Aramco, the world’s largest oil company, hopes to raise from an initial public offering (IPO). Money from the offering is to be channelled into MBS’ economic reform programme, which aims to diversify the Saudi economy away from over-reliance on oil.

A far smaller, but significant blow, caused by the attacks is that they came just ahead of the launch of an initiative to open up Saudi Arabia to foreign tourists. On September 28, the kingdom started offering visas for the first time to non-religious tourists. The following day Houthi rebels claimed that they had killed 500 Saudi soldiers, captured a further 2,000 and seized a convoy of Saudi military vehicles in the southern Najran region of Saudi Arabia, which borders Yemen. It’s not the kind of climate that will drive package holiday bookings.

Fitch said its downgrade of Saudi Arabia was also related to a deterioration of the country’s fiscal position.

The Saudi finance ministry responded that it was disappointed by the “swift” downgrade and urged Fitch to reconsider it. It contended that the move did not reflect the kingdom’s response to the September 14 attack or its ability to handle adversity.

The move placed Saudi Arabia one notch above the assessment of rating agency S&P Global. It also came ahead of a potential international sale of dollar-denominated Islamic bonds by Riyadh.

“In our view, Saudi Arabia is vulnerable to escalating geopolitical tensions given its prominent foreign policy stance, including its close alignment with US policy on Iran and its continued involvement in the Yemen war,” Fitch said.

Risks of deeper conflict
It saw a risk that the US and Saudi Arabia could be pulled into a deeper conflict with Iran or its allies. Iran has said it will deliver a broad military response to any retaliatory strike made against it in the wake of the oil facility attacks. It has warned the Gulf could go up in flames, something Trump might not be thrilled to see ahead of his 2020 re-election campaign, especially if there are substantial casualties among the US armed forces stationed in the region.

“Although oil production was restored fully by end-September, we believe that there is a risk of further attacks on Saudi Arabia, which could result in economic damage,” Fitch also noted.

“We have revised our assessment of the vulnerability of Saudi Arabia’s economic infrastructure to regional military threats as a result of the most recent attack,” the agency added.

S&P Global Ratings last week affirmed its A-(minus) rating of Saudi Arabila, saying however that the rating could come under downward pressure should Saudi oil infrastructure be attacked repeatedly.

Fitch said it was forecasting a widening of the Saudi fiscal deficit to 6.7% of GDP from last year’s 5.9%. It pointed to a loosening of fiscal policy and lower average oil prices and production.

The finance ministry said the deficit was “well within the parameters” it had set for the 2019 budget and that financial assets “substantially exceed” liabilities.

Ratings agency Moody’s cut its 2019 forecast for Saudi economic growth to 0.3% from 1.5% after the attacks, but it explained that the move was largely the result of an overall decline in Saudi oil production.

US pulls waivers on civilian nuclear cooperation with Iran

Investors hot for corona Eurobond issues from Southeast Europe
15 hours ago
LONG READ: The Growers - a handful of countries in New Europe are coping with the coronacrisis and are still expanding
8 days ago
Foreign share of Ukraine's domestic bonds falling, demand for fresh debt spluttering
6 days ago
Russia’s VTB trapped in a London lockdown until 2024
6 days ago
Movie night at the airport
11 days ago