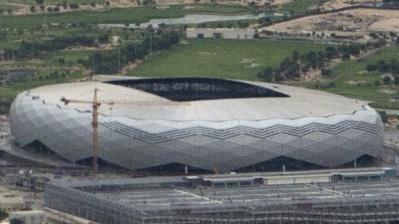 Education City Stadium and Oxygen Park in Al Rayyan have been built for the World Cup tournament. / Elspamo4 CC-by-sa 4.0.
By bne IntelIiNews April 12, 2022

Half a million Iranians are expected to visit Qatar to attend the 2022 FIFA World Cup football finals, a four-week tournament that starts in late November.

That was the prediction of Iranian transport and urban development minister Rostam Qasemi as he met with Qatari counterpart Jassim bin Saif Al Sulaiti for discussions that included consideration of how the event might benefit from the use of Iranian tourism infrastructure. Qatar and Iran face each other across the Persian Gulf, separated by a distance of 825 kilometres (515 miles), or a 55-minute flight. In the championship involving 32 teams, Iran will in group-stage matches play England, the US and the winner of a playoff between Wales and Scotland or Ukraine.

Relations between Qatar and Iran intensified during the Qatar diplomatic crisis that ran from June 2017 to January 2021. In a row over various Arab countries’ support or opposition for militant groups in the Middle East, Saudi Arabia, the UAE, Bahrain and Egypt severed diplomatic relations with Qatar and banned Qatari-registered planes and ships from their airspace and sea routes. However, Qatar’s difficulties were eased by support from Turkey and Iran, with both countries, for instance, allowing Qatari flights to divert through their airspace and assisting in facilitating export flows of basic goods such as foodstuffs to the emirate.

Following his meeting with Qasemi, the Qatari minister was reported by the Tehran Times on April 11 as saying: “The World Cup 2022 is not exclusive to Qatar and we intend to use the capacities of all countries in the region in this regard.”

The ministers met on the Iranian island of Kish in the Persian Gulf.

Iran’s Ports and Maritime Organization (PMO), was cited as saying they addressed the use of Iran's maritime and port infrastructure.

Qasemi was reported as saying: “Due to the boom in trade between Iran’s Dayyer port and Qatari ports, the issue of equipping this port’s customs with X-ray monitoring devices is under way.”

The International Imam Khomeini port in Iran’s Khuzestan province could feature in extensive trading of goods with Qatar, he added.

It was further reported that, referring to the proximity of Bushehr province’s ports to Qatari ports, Qasemi underlined the important role of Hormozgan province’s commercial ports, including Shahid Rajaei container port, in expanding trading exchanges with Qatar.

“Given the Qatari government's interest in joint cooperation between Tehran and Doha to support the World Cup 2022 and the use of Iran's tourism infrastructure, we hope that with the signing of cooperation agreements between the two sides executive issues will be pursued quickly,” Qasemi was said to have concluded.

The Qatar World Cup football finals are the first to be held in an Arab country.

Tug of war emerging over what role Iran (and its oil) should play in new world order
bneGREEN: Iran records one of the hottest days on Earth ever
Nuclear deal dealt possible death blow as Iran yanks UN cameras