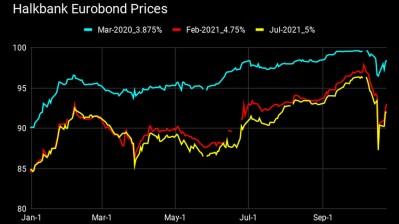 US District Judge Richard Berman on October 23 ordered Halkbank, Turkey’s second largest government-run lender, to send representation to the November 5 second hearing of ‘The US vs Halkbank’ Iran sanctions evasion case, Reuters reported. The bank failed to send anyone to the first hearing and was deemed to be a “fugitive” by prosecutors.

“Should Halkbank fail for a second time to appear pursuant to the Second Summons, the Court will consider any appropriate sanctions for knowing and wilful noncompliance,” Berman said in a court filing.

Such sanctions would only amount to a penalty for failing to appear in court; they would not reflect a finding that the bank was guilty of the charges against it.

Halkbank declined to comment on the order, according to the news service.

Federal prosecutors in Manhattan claim that Halkbank participated in the illicit movement of around $20bn in Iranian oil revenue through the US financial system between 2012 and 2016.

“Despite the fact that the Bank's ongoing discussions with the US Department of Justice to resolve this matter without indictment have not yet come to a conclusion, this [indictment] was filed as part of the sanctions introduced against our country by the US government in response to Operation Peace Spring, heroically launched by the Turkish Army to secure our borders and establish peace in the region,” Halkbank said on October 16 in a stock exchange filing after news it was being prosecuted in the US broke.

Given that the indictment seemed to arrive out of nowhere amid the bipartisan displeasure at Turkey’s military offensive in Syria, as well as Donald Trump’s “betrayal” of the US-allied Kurds that cleared the way for the incursion, the court case is widely viewed as politically motivated. However, it is not known whether Trump was informed prior to the filing of the indictment.

Also open to speculation is whether Trump might try stalling any moves that could result in fines or sanctions against Halkbank. Most Turks assume that the judicial process will be shaped by the domestic political struggles in the US and also the direction of US-Turkey relations including the personal relations between Turkish President Recep Tayyip Erdogan and Trump.

Trump and his lawyer Rudy Giuliani have not faced any inquiries over their interventions in the Halkbank case as yet, but they are currently in trouble with Trump’s Ukraine scandal.

However, some US senators wrote an October 22 letter to the executive vice president and chief compliance counsel of The Trump Organization to request certain information on Trump’s financial income from Trump Towers in Istanbul no later than November 12. And late on October 22, news agencies reported that Oregon Senator Ron Wyden, a Democrat and the ranking member on the Senate Finance Committee, has written to US Treasury Secretary Steven Mnuchin asking if Trump or anyone acting on the president’s behalf had asked him to “handle, intervene, or otherwise engage with Turkish concerns related to Halkbank, or with Halkbank generally?” Wyden, who requested an answer by November 20, said he was launching an investigation to examine the relationship between Halkbank and Trump administration officials. His letter cited an October 16 Bloomberg report that Trump told Erdogan in April that Mnuchin and US Attorney General William Barr would handle the Halkbank issue.

Moody’s Rating Services released on October 24 a Halkbank ‘Update following review for downgrade’ in which it highlights a “weak operating environment, lack of market access, and historic governance issues at senior management level”.

The market consensus forecast for the Q2 net profit was TRY316mn. A TRY385mn cut in provisions limited loss of profitability in the quarter.

Loans grew by 18% year-to-date to TRY287bn while the non-performing loans (NPLs) ratio rose to 4% due to a TRY1.5bn energy sector loan. Total assets amounted to TRY429bn and deposits stood at TRY267bn at end-June. Net profit declined by 68% y/y to TRY615mn in H1.

Meanwhile, Halkbank, along with state-run peers Ziraat and Vakifbank, have been launching consecutive packages to boost loan growth as part of the government’s plans to open the credit taps to reboot Turkey’s humbled and ailed economy in the wake of the 2018 balance of payments crisis.

In response to the latest Halkbank indictment, the Borsa Istanbul temporarily prohibited short selling in banking shares within the BIST-30 Index, effective from October 16, within the scope of a decision taken by its chief executive. It said the shares affected were those of Halkbank, Akbank, Garanti Bank, Halkbank, Is Bank TSKB, Vakifbank and Yapi Kredi Bank.

The stock exchange also introduced a depositary restriction. The move restricted investors to only selling their holdings in the seven banks in question on receiving the shares two days after their purchase. It also introduced a requirement that shares in the banks only be sold via the brokerage houses holding the shares.

On October 21, the Borsa Istanbul administration removed the depositary and brokerage restrictions but the short-sales ban remained effective as of October 24.

Amid the market tensions, the growing number of irregular measures are hurting the efficiency of Turkey’s financial markets. Analysts widely complain of incompetent fiscal and monetary policies pursued by the Erdogan administration, while the on-off threat of US sanctions and Halkbank indictment mean that the Istanbul exchange stays in a roller-coaster mood, with liquidity still dry. CEO Atilla has his work cut out.

Ukraine together with Russia is one of the world’s biggest grain exporters and already the main source of wheat for many developing countries. A Russian invasion of Ukraine would smash its agricultural sector and send grain prices rocketing.

The way the utilities system is designed meant that a whole series of related essentials were quick to fail.

War in Ukraine would send global grain prices soaring, threatening a possible repeat of the Arab Spring
1 hour ago
Uzbekistan: How a power outage sent a country into meltdown
7 hours ago
Emerging Europe M&A soars by 55% to €94bn in 2021
1 day ago
Lithuania looks for quality, not quantity in fintech
1 day ago
Who needs a war?
3 days ago