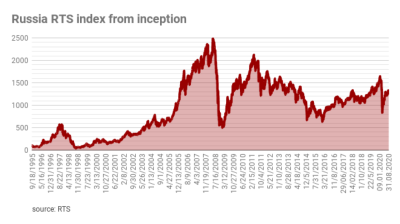 The dollar-denominated Russia Trading System (RTS) celebrates its 25th birthday. The predominant Russian stock exchange was launched on September 1, 1995 with the leading RTS index set at an arbitrary 100.

The market has provided a roller coaster ride for investors in the intervening two and half decades, making some mega-rich and impoverishing others. Making money on the RTS has always been about timing. The traditional buy-and-hold strategy has never worked unless you bought in 1995.

Today the RTS index was at 1,274 shortly after opening – a more than ten-fold increase on its launch level, but in between it has risen to an all-time high of 2487.92 on May 19, 2008 just before the Global Financial crisis broke, but had fallen to an all-time low of just 38.53 on October 5, 1998 in the wake of Russia’s August 1998 bust that destroyed the banking sector and saw the ruble devalue by three quarters against the dollar. Its best year was 1999, when it rose 197% in 12 months.

One long-serving investment banker explained the rule of thumb for investing into Russian stocks: “It’s easy. All you have to do is ask: “Is this a crisis year?” If it is then the market can lose up to three quarters of its value. But if it is not then it usually returns about 20% and it is easy to make money.”

That rule has broken down more recently, as bne IntelliNews reported, but this year was definitely a crisis year. After a rally in the first two months that took the index to a six-year high of 1,644 on January 21 the market was hit by a massive sell-off in March after Russia walked out on the OPEC+ production cut deal on March 6 that collapsed the oil price. The RTS index was cut in half and fell to a low of 889 by March 23. The index has made back some of the ground lost but now has got stuck at just below 1,300 and if past experience is anything to go by, it could be stuck there for years.

In parallel to the RTS was ruble-denominated MICEX exchange (Moscow Interbank Currency Exchange), which was set up a few years after the RTS for currency trading, but soon became a market for trading shares denominated in the national currency.

In 2012 Russia went through a financial revolution after the two exchanges were finally merged and then hooked up the Clearstream international payments and settlement system, allowing traders in London to buy and sell Russian stocks and bonds directly from their own trading desks and without the need to go through a Moscow-based trader. The market flourished and the local bond market in particular took in around $40bn of new international capital.

And new products and market segments are being constantly introduced. The RTS Index futures contract, launched in 2005, is one of the most popular exchange-traded index instruments. It is also MOEX’s most liquid contract, ranked among the world’s top-20 most liquid index derivatives contracts, according to the Futures Industry Association (FIA).

However, the Russian stock market still suffers from a series of fundamental flaws. While the technical infrastructure has become very sophisticated and is managed by a unified central depository that was also created in 2012, what’s missing is a truly diversified pool of investors.

One of the reasons for the market’s extreme volatility is Russia is still missing the huge institutional investors like pension funds and insurance companies. These industries do exist in Russia, but they are still small in comparison to their Western peers. Institutional investors typically have investment horizon that stretches out for decades and do make those very conservative buy-and-hold decisions that create a stable foundation for the market and dampen volatility.

For most of its life the investments into the RTS have been fairly evenly split between local banks and emerging market equity investors. But both of these investors typically have a short investment horizon of less than one year, or even a single quarter. That means when some bad news breaks everyone heads for the exit together.

Another part of the problem is that financial literacy in Russia is very low: Russian have not been planning for their retirement and the few that do have concentrated on saving cash in a bank or buying an apartment, not buying mutual funds or investing in equities.

For much of the last two and half decades Russia has suffered from high double-digit inflation, so the priority has not been to make decent returns over the medium term, but simply to stop inflation eating away at the cash you already have. Banks had to offer high interest rates to attract deposits and so the “investment” of choice has been simply to find the bank that paid the highest interest rates.

That is starting to change now after the CBR has put through a string of aggressive rate cuts in the last few years thanks to falling inflation. Currently the overnight rate is 8.25% and inflation was 3.6% in July. Commercial bank deposit rates have been constantly falling and bankers report they have sunk low enough for regular Russians to start to look around for something that pays a better return.

And interest in equities is rising. MOEX reports that in the last two years more than 400,000 individual trading accounts have been opened as increasing numbers of Russian start to buy stocks. Likewise, as the entire Russian banking sector moves increasingly online, most offer the opportunity to trade stocks or buy funds. In fact, it's a bit like any 25-year old that has grown up enough to start to dabble in stocks, but is not really sure of themselves yet.