Has the flood of foreign investment into Ukraine’s local bond market run its course? 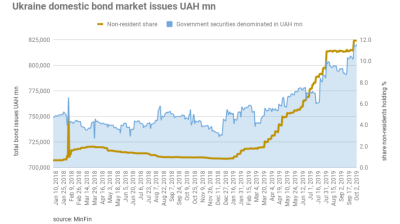 Ukraine’s Finance Ministry only raised $3.1mn from bond sales on October 1, down from $534mn the week before
By Ben Aris in Berlin October 4, 2019

Has the inbound flood of foreign investment into Ukraine’s local bond market run its course? Ukraine’s finance ministry only raised UAH77.2mn ($3.1mn) from the sale of three-month, one-year and two-year bonds at its weekly bond auction on October 1 – an almost negligible amount compared to the UAH13bn ($524mn) raised at the auction a week earlier.

There has been a revolution on Ukraine’s local bond market since it was hooked up to the Clearstream international payments and settlements system this summer. Some $3.5bn of foreign investment has flooded into the market in a matter of months, taking the pressure off government finances and turning into a major source of funding for the government, just as debt repayment obligations rise as a debt restructuring deal struck five years ago expires.

However, after climbing steeply in recent months to the point where foreign investors own 12% of all the outstanding bonds from next to nothing at the start of the year, sales suddenly stalled in August. There was another one-off step up at the end of September taking the foreign share to 11.9%, but this week’s auction suggest the growth of sales to foreigners has stalled.

Part of the reason is the Ministry of Finance has almost completed its borrowing programme for the year and has tightened conditions. The ministry says it will stop offering bonds denominated in foreign exchange as it tries to move its borrowing over to UAH-denominated debt. At the same time the maturity of bonds on offer has been lengthened and the ministry is squeezing yields to reduce costs: yields have fallen a whopping 400bp this year from around 19% in January to around 15% now.

Around half of this week’s auction receipts – UAH42.7mn – came from the sale of two-year bonds to seven out of eight bidders at a weighted average interest rate of 15.36%, reports Kyiv-based brokerage Concorde Capital. In addition, six out of seven bidders were successful in buying three-month bonds at 15.75%. The rest of the auction’s receipts – UAH15.3mn – from the sale of one-year bonds to a sole bidder at 15.09%.

While the Ukrainian economy is doing nicely and has recently been upgraded by international ratings agencies Standard & Poor’s (S&P) and Fitch, recent scandals involving oligarch Ihor Kolomoisky have thrown the political risks into sharp relief.

“Such a dramatic drop in receipts from the weekly bond auction comes as a big surprise. Apparently, non-residents, who have been generating a substantial share of auction receipts in recent months, were not interested in buying local bonds with terms of maturity of up to two years. Recall, most of the UAH auction receipts in recent months came from the sale of three-year and five-year bonds,” Evgeniya Akhtyrko of Concorde Capital said in a note.

“These results show that the situation at the primary bond market is very shaky, which might undermine the government's confidence in its current course of quick interest rate cuts. Moreover, the government might face difficulty with financing the budget deficit if auction receipts remain low.”