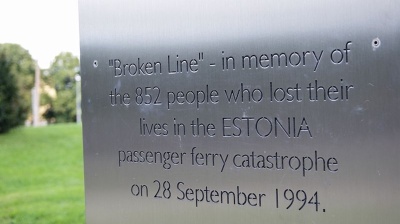 The disaster is commemorated by the Broken Line monument in Tallinn.
By Linas Jegelevicius in Vilnius September 28, 2020

Estonia’s Margus Kurm, a former state prosecutor and, during 2005-2009, head of the government's investigative committee looking into the sinking of ferry MS Estonia in 1994, said in an interview that new scenes of the shipwreck show the ship most likely sank after a collision with a submarine.

Kurm insisted: “It was a collision with something large enough to create a four-metre long hole in the ship's hull.”

“Considering that the tear is below the water line and considering no-one has ever mentioned that another ship could have sunk with Estonia and none of the survivors have said they saw a ship close to Estonia, the most likely cause is Estonia collided with a submarine,” he was quoted as saying. Kurm reasoned that the submarine could have belonged to Sweden.

Estonian Prime Minister Juri Ratas said on September 28 that due to the new circumstances that have recently emerged, a new investigation into the sinking of the ferry MS Estonia will be launched under the leadership of Estonia.

According to the prime minister, the three countries have agreed that Estonia as the ferry's flag state will lead the new investigation. "Our wish is for the truth to definitely come to light," Ratas said. "Coordination of further investigation needs to be agreed between the three countries. On the Estonian side, it is currently being led by the Government Office, and at some point this technical investigation will actually have to be carried out."

The foreign minister added that the new investigation will still be completely autonomous. "We do not plan to simply add a few pages to the 1997 report. And should new important information emerge, the countries will process it together," Reinsalu said.

Reinsalu also said that the price of the investigation is not an issue and that the countries will contribute exactly as much as necessary.

The shipwreck was investigated by a joint committee formed by the governments of Estonia, Finland and Sweden between 1994 and 1997 and by a government commission headed by the Public Prosecutor's Office in 2005-2009.

In 1995, Estonia, Finland and Sweden signed an agreement to protect the shipwreck, which prohibits diving to the wreck.

The disaster is commemorated by the Broken Line monument in Tallinn.