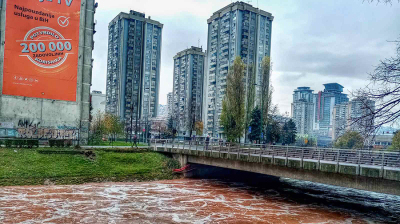 Rivers in Sarajevo are now almost as high as the bridges. / E. D.
By Eldar Dizdarevic in Sarajevo November 5, 2021

Extremely heavy rain that fell on the night of November 4 caused a blackout on the morning of November 5 in Sarajevo and other parts of Bosnia & Herzegovina.

Some parts of the Bosnian capital have been closed to traffic due to the overflow of the Miljacka and Zeljeznica rivers, and schools in Sarajevo have been closed. A plant where oxygen is charged for COVID-19 patients was submerged.

During the day, the rain stopped falling, so the electricity supply stabilised, but the citizens of Sarajevo and other cities in Bosnia, such as Konjic, are still afraid that the rivers could break their banks if the rain continues to fall.

Dozens of people have been evacuated from retirement homes, other institutions and private houses in the worst hit parts of the city.

The blackout in Sarajevo and other cities in Bosnia also caused communication problems, with landline and mobile phones ceasing to work and internet access being disabled too.

The situation has brought back memories of 2014 when the worst floods since records began engulfed large parts of Bosnia as well as Serbia and Croatia, resulting in the deaths of over at least 77 people, 57 of them in Serbia. In Bosnia, almost 40% of the population, over 1.5m people, were left without electricity and running water until infrastructure was repaired.

Belarus expands its use of the death penalty
1 day ago
The Mariupol siege is over as the last Azov defenders surrender
1 day ago
Kyrgyzstan: Eccentric health minister fights for his job amid claims of corruption and bullying
2 days ago
Azov commanders have remained behind in the Mariupol steelworks to continue the fight
2 days ago
Russia hopes Chinese carmakers will help revive Moskvitch brand
2 days ago