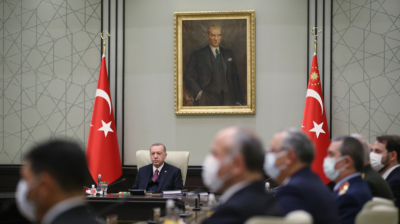 Hiding its failures has become “crucial” for the Erdogan administration, according to Marc Pierini, a visiting scholar at the Carnegie Europe think tank.

In an analytical piece first published in French in Le Monde earlier this week, Pierini, who focuses on developments in the Middle East and Turkey from a European perspective, wrote: “After years of patient dismantlement of its rule-of-law architecture, Turkey is now governed by autocracy: free media have been eliminated, civil society suppressed, the judiciary politicized, and adherents of the Gulen movement (the AKP’s political ally between 2002 and 2013) purged.

“Yet, President Recep Tayyip Erdogan does not approach the 2023 Republic centennial with a successful record. The economy is on the brink of an abyss, and opinion polls illustrate serious difficulties for the alliance between the Justice and Development Party (AKP) and the Nationalist Action Party (MHP). For Ankara, hiding these failures is therefore crucial.”

To divert attention from the failures, argues Pierini, Erdogan has seized on historical Turkish claims to territory in the eastern Meditteranean where there are thought to be gas reserves.

He contends: “In this bleak picture, the theme of maritime borders appeared as the ideal tool to summon up national ardor: the litigation with Cyprus and Greece is old and multifaceted; recent gas discoveries off the coasts of Egypt, Israel, and Cyprus illustrate the injustice done to Turkey; and the EastMed Gas Forum was just created between Cyprus, Egypt, Greece, Israel, Italy, Jordan, and Palestine to consider—without Turkey—a concerted exploitation of the resources and the construction of an underwater pipeline to Southern Europe.

“Seen by Ankara as a replay of Mustafa Kemal’s redrawing of the national territory between 1920 (Treaty of Sevres) and 1923 (Treaty of Lausanne), the conquest of this new maritime and gas frontier in the Eastern Mediterranean was hence organized around an agreement with Libya on a common maritime area (November 2019), a vast research and drilling campaign—accompanied by considerable military means—in Greek and Cypriot waters, and a formidable media campaign through social networks and outraged foreign ministry statements. Topped up with a generous dose of political hubris, Ankara’s tactical move has managed to mobilize the country’s energies, at least at first sight.”

The wave of nationalist fervour has, says Pierini, ended up hiding a simple reality, namely that today’s Turkey is diplomatically isolated, not just from the EU but also from the US, the Arab League, and Israel.

Pierini also adds: “The political fallout from willfully disruptive policies have been felt throughout 2019 and 2020: Turkey was excluded from the U.S. F-35 stealth aircraft program for having deployed Russian S-400 missiles; Volkswagen froze a major investment due to military operations in northeastern Syria; Moody’s lowered Turkey’s rating to a historical low; and the EU reacted to the Turkish paramilitary assault (disguised as a refugee exodus) launched on Greece’s land border in February 2020.

“Such reactions show the extent of Turkey’s self-inflicted sanctions, more damaging than any eventual official sanction from the European Union. In this warlike atmosphere, who is now going to provide Turkey with the much-needed short-term funds, direct investment, and technology?”

The European Council summit [it was set for September 24-25 in Brussels but has been postponed to October 1-2] faces a heavy task in confronting a Turkish leadership confident in its ability to divide the EU, and must work out how to choose between principles, possible actions, and unsound options, says Pierini, observing that “unsound options” abound, many of them being “traps”.

“An international conference on the Mediterranean would not lead to a genuine dialogue but only offer a podium for new high-flying statements by Turkey’s foreign minister,” he adds. “Similarly, high-level visits would only help Ankara show that, as in 2015–2016, tough foreign policy brings the Europeans to their knees. As for a European or German mediation, it is mostly illusory since Turkish diplomats have already requested a major condition (‘impartiality’) that is tantamount to neutralizing mediators in advance.

“Restating EU principles, military ‘deconfliction’ under the aegis of NATO, preparation of sanctions, willingness to facilitate a bilateral Greek-Turkish dialogue, and diplomatic distancing are therefore the best ways to calm down the situation in the Eastern Mediterranean.”

The academic concludes: “Should Greek and Turkish delegations manage to sit down at the same table, the next question will be Ankara’s appetite for compromise. In other words, is the Turkish leadership able to accept a less than optimal compromise on Mediterranean waters with foreign powers at a time when the economic and political risks on the domestic scene are so high? Or, conversely, will endless overreach be seen as necessary—in the run-up to the next elections (if they take place)—to portray the leadership as the savior of a nation under attack from all sides?

“The European Union’s DNA will lead it to privilege a classic diplomatic track. Turkey must be persuaded that permanent disruption comes with catastrophic consequences.”