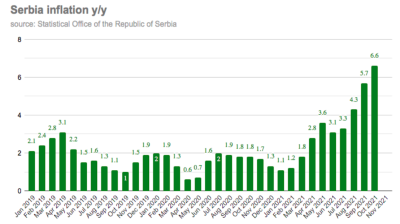 Prices of goods and services used for personal consumption in October 2021 increased by 6.6% in relation to October 2020, the Statistical Office of the Republic of Serbia said in a statement. Meanwhile, consumer prices rose by 0.9% on average month on month, and by 6.4% compared to December 2020.

Inflation has accelerated in the last few months; in January-October, average annual inflation stood at 3.4%. Commenting on the figures, the National Bank of Serbia (NBS) pointed out that three quarters of the annual inflation in October was determined by factors beyond the influence of monetary policy, namely food and energy prices, the NBS said.

On the other hand, the long-standing relative stability of the exchange rate, which will be preserved in the coming period, is a strong anchor of price stability and contributes to keeping core inflation at a low level, according to the central bank.

In October, unprocessed food prices went up by 19.8% annually, mirroring a rise in the prices of fresh vegetables, fresh meat and fresh fruit by 26.9%, 21.0% and 14.4%, respectively. Due to a further increase in world food prices, the drought and higher production costs, processed food prices picked up by 5.1% annually in October.

Energy prices were up by 11.7% annually in October, mainly reflecting the 21.0% growth in petroleum product prices in the domestic market. The main impetus to rising petroleum product prices came from the higher global price of crude oil, which, owing to faster than expected global economic recovery, gained almost 20% in September and October alone, and is currently above the pre-crisis levels.

In relation to the previous month, an increase of prices was noted in the groups of transport (1.8%), clothing and footwear (1.6%), cood and non-alcoholic beverages (1.3%), housing, water, electricity, gas and other fuels (0.9%) and furnishings, household equipment and routine maintenance of the house (0.6%), the statistics office said. A smaller increаse of prices was also noted for restaurants and hotels and Education (each by 0.5%), alcoholic beverages and tobacco (0.3%), recreation and culture (0.2%) and communication and health (each by 0.1%). Prices of other goods and services mostly remained unchanged.

According to the NBS’ projection, until the middle of next year annual inflation will probably continue to move above the upper bound of the target tolerance band of 3.0±1.5%. As this year’s energy and food price hikes gradually drop out from the year on year calculation, inflation will set on a downward path as of Q2 next year and return within the target band around the middle of next year.

Keeping in mind this year’s high base, there is a chance that in the second half of the next year headline inflation might even move in the lower half of the target band. Risks to the inflation trajectory in the coming period concern primarily movement in prices of primary agricultural commodities, global energy prices, the pace of global economic recovery and the duration of problems in global supply chains.