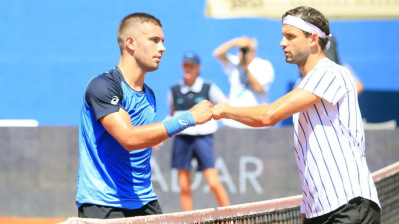 Borna Coric and Grigor Dimitrov opened the Round Robin stage at the Adria Tour in Zadar on June 20. Both later tested positive for COVID-19.
By bne IntelIiNews June 22, 2020

Croatia has seen a new spike in coronavirus (COVID-19) cases in the last few days, with several of them linked to a charity tennis tournament at Zadar on the Adriatic coast.

The event went ahead after Croatia virtually eliminated the virus, with the daily number of new cases at zero or close to zero for around a month now.

Those infected include Bulgaria’s Grigor Dimitrov and Croatia’s Borna Coric, who played each other on Saturday. Croatian Prime Minster Andrej Plenkovic will be tested for the virus after coming into contact with players at Novak Djokovic’s Adria Tour exhibition tournament.

According to reports in the Serbian media, Djokovic declined a test in Croatia, opting instead to return to Serbia.

Photographs from the tournament show spectators – including Plenkovic – sitting in crowded stands.

The tour was organised across three Balkan countries, with the opening matches taking place in Belgrade on June 12-14, before moving on to Zadar on June 20-21.

The final of the Adria Tour in Zadar was cancelled after Dimitrov tested positive for coronavirus. “As a precaution and to protect the health of all participants and visitors, the organisers of Adria Team have decided to cancel the grand finale of the tennis spectacle planned for tonight,” the organisers said on May 21.

Both Dimitrov and Coric apologised to anyone they might have infected after receiving their positive test results.

The remaining stages of the tour are scheduled for July 3-4 in Banja Luka and July 5 in Sarajevo, but it is unclear whether they will go ahead.

Croatia’s retail trade up 14.3% y/y in March as shopping habits return to normal