Hospital director warns 300,000 could die of coronavirus in Iran 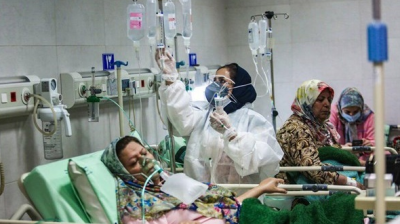 Iran has said US President Donald Trump is guilty of a crime against humanity for maintaining sanctions that Tehran claims are denying Iranian coronavirus patients vital drugs and medical equipment supplies.
By bne IntelIiNews October 14, 2020

The coronavirus (COVID-19) has so far officially killed 29,349 Iranians, including a one-day record of 279 on October 14 alone, but a hospital director has warned as many as 300,000 could die of the disease if the country is not successful in motivating its population to collective action and the outbreak persists for another 18 months.

Mohammad Talebpour, director of Sina hospital, the oldest in Tehran, gave his grim forecast to the Guardian, while adding that a third of the medical staff at his hospital had at one point contracted the coronavirus. Mohammad Reza Zafarghandi, the state-appointed head of the Iranian Medical Association, has, meanwhile, said that the medical staff in Iran are at the point of exhaustion.

October 14 also brought a record offical daily number of new infections, 4,830. The data makes for dire reading but the official picture is widely doubted as not fully representing the catastrophic reality of COVID-19 in Iran, given ministerial documents previously leaked to media outlets such as the BBC.

Officials say the country is deep into its third wave of the disease and it’s the biggest yet.

In an appeal to US President Donald Trump to ease sanctions on Iran to allow for the removal of financing and other obstacles to flows of medicines and medical equipment amid the pandemic, The New York Times on October 14 ran an opinion piece headlined “Iran’s Covid-19 Death Toll is Rising. Show Mercy, Mr. Trump.” Iran has said it is short of vital drugs in the fight against the virus because of US sanctions. It says Trump is guilty of a crime against humanity.

In an attempt to force reluctant Iranians to stick to social distancing rules, including the compulsory wearing of face masks in public, President Hassan Rouhani’s government has brought in fines equivalent to up to $6.60, initially in Tehran only. The monthly minimum wage in Iran is now worth less than $60 after the collapse in the value of the rial, thus the level of the fine is significant, but the health minister, Saeed Namaki, has said he is worried it will not be high enough to act as a deterrent. There is also concern that there will be inconsistent application of the face masks fines policy, given the different layers of bureaucracy.

On October 14, Iran announced a travel ban to and from five major cities, including the capital of Tehran and the holy northern city of Mashhad, to prevent the spread of the virus. Kianoush Jahanpour, a Health Ministry spokesman, told state TV that the travel ban was targeted at reducing risks ahead of a religious holiday on October 17. Iran’s weekend runs across Thursday and Friday.