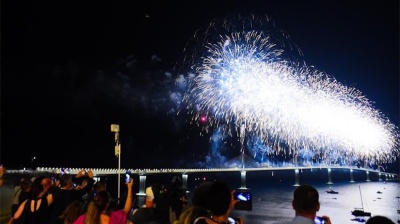 Fireworks mark the opening of the Peljesac bridge that connects Dubrovnik to the rest of Croatia. / vlada.hr
By bne IntelliNews July 26, 2022

Croatia launched the Peljesac bridge that connects the Croatian mainland with the Peljesac peninsula on July 26, giving Croatia a continuous land link that bypasses Bosnian territory.

The bridge will put an end to hours-long lines in which traders, commuters and tourists were forced to wait at the border with Bosnia & Herzegovina and was set as a top priority for Zagreb. After the collapse of former Yugoslavia in the 1990s, Bosnia maintained its coastal access, but that divided Croatian territory, cutting off the city of Dubrovnik from the rest of the country.

The 2.4km bridge completion is seen as historic moment for the country and was accompanied by a day-long programme of events with the formal ceremony being held in the evening.

"Great feeling, this is a huge day for Croatia, for all of us, for all Croats - Croats in Croatia, in Bosnia & Herzegovina, all over the world. We connect Croatia, putting an end to the discontinuity of Croatian territory," Croatia’s Prime Minister Andrej Plenkovic said at the opening ceremony as quoted by N1.

The bridge ends the territorial discontinuity created by a 1699 peace treaty under which the Dubrovnik Republic ceded the stretch of the coast around Neum to the Ottoman Empire.

Prior to the launch of the bridge, around 90,000 citizens of Dubrovnik had no free access to the rest of Croatia but were forced to go through a Bosnian checkpoint.

The entire project, including the construction of the bridge, access roads and purchase of land from private owners, has cost €525mn, with the EU providing €357mn. It was built by China’s CRBC.

The European Commission welcomed the official opening of bridge, which is one of the biggest projects in the EU and the largest EU-funded project in the country.

“By connecting the South/Dubrovnik to the rest of Croatia, the bridge will improve the life of Croatians, economic activity, territorial cohesion,” EU Commissioner for Cohesion and Reforms Elisa Ferreira wrote on Twitter.

The infrastructure project has been an ongoing topic of dispute between Bosnia and Croatia since 2007, when the construction of the bridge was first announced.  Croatia is building the bridge so its citizens can reach the south of the country without crossing into Bosnia. On the other hand, Bosnia has protested that the bridge would prevent large ships from entering the port of Neum.

Ukraine will receive $5.5bn in support from the US later this month
5 hours ago
John Malkovich to turn Skopje into Hollywood of the Balkans
6 hours ago
Envoy says start made on construction of Turkish attack drone factory in Ukraine
15 hours ago
Huge explosion rocks Russian airbase on the Crimean peninsula
18 hours ago
Russia cuts oil flow via Ukraine's Druzhba pipeline, blaming sanctions for blocking transit payments
19 hours ago