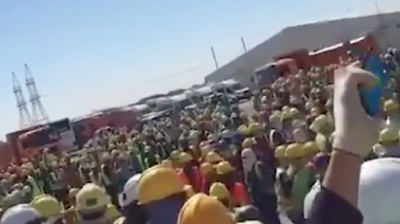 At least 30 foreign workers were injured in a brawl that broke out at a site near Tengiz oilfield on June 29 where around hundreds Kazakh oil workers rallied to protest unequal labour and pay conditions among local and foreign workers. Unconfirmed reports, citing workers who took part in the event, said the number of protestors stood at "15,000" people.

Hundreds foreign workers were immediately evacuated, security service of the Tengizchevroil, the joint venture formed between Chevron, ExxonMobil, KazMunayGaz and Lukoil to develop Tengiz, reported. Tensions on the site over discrepancies in working conditions have been on the rise, according to reports. However, the fight was sparked by a photograph, considered offensive by local Kazakh workers, shared among foreign workers.

Many of the workers at the site appeared to be affiliated with Consolidated Contracting Engineering and Procurement S.A.L Offshore, a local subcontractor.

Tengizchevroil described the events as an "interpersonal conflict" and said it resulted in several injuries to contractor employees, with more than 40 workers receiving medical assistance at its clinics.

"The situation is stable as of now and TCO [Tengizchevroil] continues to work closely with law enforcement bodies, government authorities and contractor companies to ensure the safety and well-being of the personnel at Tengiz," said a statement from the company on June 30.

"Local police have initiated an investigation and will maintain a presence for as long as necessary. Work at the 3GP construction site has been temporarily suspended and TCO is assessing the appropriate time to resume activities. Other TCO facilities are operating as normal."

Videos and photos circulating on social media showed hundreds of workers in hard hats and uniforms rallying at midday on June 29. Other videos showed Kazakh workers beating up foreign workers, mostly “ethnically Arab”, according to posts made online by Kazakh workers.

The Jordanian foreign ministry’s press department said five of the 107 Jordanians working at the Tengiz oil field were "slightly injured". Jordan's ambassador to Kazakhstan, Yousef Abdelghani, posed for photographs with bruised Jordanian workers at a hotel in the Caspian town of Atyrau.

Around 150 Lebanese workers were also evacuated from the oil field and placed under the protection of local law enforcement, according to Lebanon’s ambassador to Kazakhstan, Giskard el-Khoury. The Lebanese workers may be flown back home.

Part of a trend

The Tengiz protests were likely more than a mere workers strike. Both minor and widespread protests have been taking place across Kazakhstan in the past months since February, culminating in protests against Kazakh President Kasym-Zhomart Tokayev’s election on June 9-13. The protests saw 4,000 people arrested, but the brewing public discontent appears to have made Kazakh citizens more susceptible towards holding rallies to express their dismay.

Latest mass protests included hundreds of residents of Arys, where munitions blasts led to the evacuation of 35,000 people last month, rallying in Shymkent, the capital of Turkestan Region.

On the same day as the Tengiz incident, the largest Kazakh city of Almaty held the first sanctioned peaceful protest in 11 years, local media outlets reported.

Opposition activists on social media have also been calling for protests on July 6, “the Day of the Capital” holiday in Kazakhstan.

BREAKING: Ukraine cancels dollar bond sale after NBU governor resigns
5 hours ago
Moldova’s ruling Socialists accused of “abducting” MP after he defected to Pro Moldova
7 hours ago
Ukraine’s NBU governor Smolii quits under pressure from oligarchs
17 hours ago
Russian vote through changes to constitution in referendum, Putin cleared to rule until 2036
8 hours ago
Turkey hit by VW’s scrapping of auto plant plan and refusal by Europe to list country as safe for tourism
14 hours ago