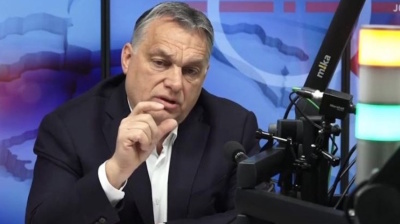 Pegasus was reportedly first used in 2018 in Hungary after the visit of Prime Minister Viktor Orban’s chief security adviser’s to Israel.
By bne IntelliNews July 20, 2021

Hungarian opposition parties have called for the parliament’s National Security Committee to hold an extraordinary session on July 20 to investigate the alleged misuse of the Israeli spyware known as "Pegasus" against Hungarian citizens. The ruling Fidesz party has already signalled that it will boycott the meeting. The government has denied any involvement in the surveillance of Hungarian citizens.

Paris-based nonprofit Forbidden Stories found 300 phone numbers from Hungary on the leaked database containing the list of some 50,000 that may have been targeted by governments using Israeli’s NSO top-notch spyware software, Pegasus. The scandal broke on Sunday. So far, at least 10 Hungarian lawyers, one opposition politician and five journalists' phone numbers are on the leaked list of potential targets.

The release of the report deemed by former CIA agent Edward Snowden as the story of the year has caught the government off guard. The first reaction came from a pro-government news site Pesti Sracok, which is not a member of the giant media conglomerate grouping some 500 outlets. State media and government-friendly outlets were silent during the day and only published comments by Hungarian officials in the afternoon.

Foreign Minister Peter Szijjarto told a press conference that the Information Office under his control had never used the software in question and had not entered any kind of cooperation in connection with it.

Justice Minister Judit Varga evaded questions whether the government had anything to do with the surveillance of journalists and businessmen. She said that states in 21st century need to have the technologies to carry out national security tasks, which many interpreted as an implicit acknowledgment that Hungary’s state security could have gotten hold of one of the most powerful spy softwares.

Like all other "rule-of-law countries secret services are separated from the political sphere", Varga said.

Interior Minister Sandor Pinter replied to an inquiry by independent MP  Bernadett Szel that he is ready to answer all further questions at a meeting of parliament’s national security committee behind closed doors.

That may not materialize as Hungary's ruling conservative-nationalist party has already signalled that it will not attend the session. The Fidesz fraction said a hearing was “not justified” because Hungary’s national security agencies “fully abide by the law”.

Reports published in the leftist press are unfounded and aimed solely at stirring up political sentiments, deputy head of the committee, Janos Halasz told reporters.

According to the Washington Post, a former NSO employee, speaking on the condition of anonymity confirmed the Hungarian government was one of their clients.

Pegasus was first used in 2018 in Hungary after the visit of Viktor Orban’s chief security adviser’s to Israel, according to Direkt 36, the Hungarian investigative team in the project.

A former Hungarian secret service officer also told the news site that the government had long been bothered by the fact that traditional interception methods could not access encrypted communications conducted through encrypted apps such as Signal or WhatsApp.

Direkt 36 points out that there were high-level meetings between the Israeli and Hungarian governments in 2017 and 2018.

"Hungary gave the most incriminating response I've ever seen to a request for comment on the #Pegasus surveillance scandal. I mean, whenever I'm 'not aware' of whether I did something or not, I demand to know if foreign spies tipped you off about it," said former CIA agent Edward Snowden on social media.

Snowden referred to the government’s first reaction to the inquiry by the Washington Post on the issue. The government responded broadly in the statement: "Hungary is a democratic state governed by the rule of law, and as such, when it comes to any individual it has always acted and continues to act in accordance with the law in force. In Hungary, state bodies authorised to use covert instruments are regularly monitored by governmental and non-governmental institutions. Was there any intelligence service to help you formulate the questions?"