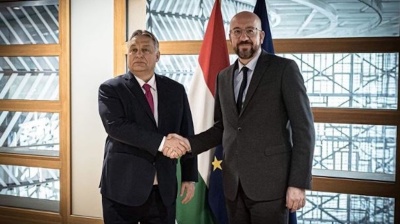 Hungarian Prime Minister Viktor Orban said the EU's next seven-year budget needs to be put on a fair footing after a meeting with European Council President Charles Michel in Brussels on February 3.

Orban said member states must agree that regaining competitiveness is of primary importance and that requires a budget that ensures member states the greatest possible degree of flexibility; furthermore, countries that are prepared to cut taxes must be encouraged, he added.

The Hungarian PM said that European economic policy had been "ruined" in Brussels in recent years and the results will soon become apparent.

Speaking after the meeting with Michel, the Hungarian PM complained that the basic idea of the EU's 2021-2027 draft budget is unfair and contains changes that aim to shift money from poorer member states to richer ones. In some instances, poorer countries' share of funding distributed by Brussels is just 5% of the total, even though their citizens account for one-fifth of the EU's population, he said.

EU leaders will gather on February 20 to discuss the next budget for the EU27.

As his party is suspended from the centre-right European People's Party (EPP), Orban was not invited to the EPP Political Assembly meeting on Monday.

EPP leaders decided to keep Fidesz in suspension for an indefinite period as there has been no visible progress in the ruling party's compliance with democratic norms such as respect for the rule of law or freedom of expression, EPP president Donald Tusk said after the meeting.

"If the situation does not change, I cannot see Fidesz returning to our family, at least as long as I am the president of the EPP," the former European Council president was quoted. Tusk remains at odds with Hungary's illiberal strongman over a string of issues.

The decision was in line with consensus. The Hungarian PM will be traveling to Berlin next week to meet with Chancellor Angela Merkel and CDU leader Annegret Kramp-Karrenbauer as part of his diplomatic offensive to discuss the EU's budget and probably his future within the EPP, local media reported.

The voting rights of Fidesz were suspended in March 2019 after the Hungarian ruling party launched a smear campaign against then European Commission president Jean-Claude Juncker at the beginning of the European Parliament election campaign. Apparently it was the last straw for many in the mainstream party.

After the decision, a committee of 'wise men' - former EU Council president Herman Van Rompuy, former European Parliament president Hans-Gert Pottering and former Austrian prime minister Wolfgang Schussel - was tasked to come up with an answer on how to deal with Fidesz. The three veteran EU politicians are reportedly not on the same grounds. Von Rompuy is in favour of letting Fidesz go from the EPP, Schussel is against and Pottering is in between the two.

The EPP also remains divided. Politicians of the German conservative CDU and CSU warned against expelling the party hastily from their ranks. Orban still enjoys the support of the French, Italian, Spanish and Austrian members, while smaller countries, Finland, Belgium and The Netherlands, have lobbied for the party's expulsion.

In September last year, EPP delegates also approved the launch of the Article 7 procedure against Hungary in the European Parliament.

Last month Orban said he was "one centimetre" from leaving the faction after a resolution on the Article 7 procedure against Poland and Hungary was approved by a two-thirds majority in the European Parliament on January 15.

Two-thirds of the EPP also voted against Hungary, which was interpreted by Hungarian officials and Orban himself as a betrayal.

Fidesz will be suspended at least until the first of half of 2021, when a special congress on the issue will be convened, Finnish MEP Aura Salla tweeted.

The EPP had no objection to Orban's visit to Rome, said Tusk, adding it was symbolic that he is at a "nationalist meeting with far-right political parties during the EPP Political Assembly."

In Rome, Orban was greeted by Italian PM Guiseppe Conte, according to Orban's Facebook site.

Meloni praised Hungary's tax and family policies after a meeting with Orban.

Fidesz' ties to the EPP were not discussed but Meloni said she would be delighted if the Hungarian ruling party were to join the European Conservatives and Reformists (ECR) faction.

Belarusian police use stun grenades, pepper spray and fire shots to control Sunday's mass rallies
5 hours ago
Major fighting erupts between Armenia and Azerbaijan over Nagorno-Karabakh
10 hours ago
TURKEY INSIGHT: Follow the (hot) money
2 days ago
Lukashenko has isolated himself from the rest of the world with a secret inauguration
2 days ago
Iran’s oil minister openly admits forging export documents to dodge US sanctions
2 days ago