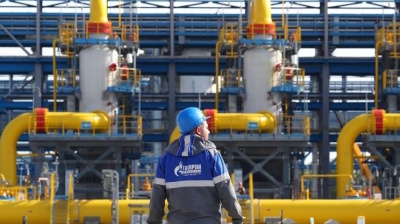 The agreement allows state utility MVM to pay for gas over a three-year period if prices exceed a certain threshold between October and March. / bne IntelliNews
By Tamas Csonka in Budapest October 4, 2022

Hungary's MVM has reached an agreement with Russia's Gazprom on making deferred payments for gas for the winter period, the state utility company announced on October 3.

The agreement helps ease pressure on Hungary’s widening current account deficit and its currency, which had plunged to historic lows before the announcement.

The agreement will be used by Viktor Orban's regime to show how Hungary is benefiting from its close relationship with Vladimir Putin's dictatorship. Hungary has been the most vocal ally of Putin in the EU, drawing criticism from members for breaking ranks.

Hungary is one of the most dependent countries on Russian energy. Russia accounts for more than 90% of gas imports. The government signed a 15-year contract with Gazprom in October that guarantees an annual supply of 4.5bcm. A few months ago, the Russian gas giant agreed to boost the delivery of up to 5.8 mcm gas per day above the volume stipulated in the long-term contract.

The agreement amid the extreme price volatility expands the financial room for manoeuvre of the company, MVM said. The state utility giant stressed that the security of energy supply is guaranteed by the long-term gas agreement signed with the Russian state energy group in September 2021.

The Hungarian energy group also announced it would tap some 800 mcm of gas in a storage facility in east Hungary with a value of around €1.5bn. The usage of this gas could help Hungary maintain the utility price subsidy, according to Nagy.

Speaking after the MVM’s announcement, Economic Development Minister Marton Nagy said the agreement allows MVM to pay for gas over a three-year period if prices exceed a certain threshold between October and March.

At current market spot prices, the deal paves the way for deferred payment of €1bn and if the price goes up to €300/MWh, deferred payments could reach €3.5bn-4.5bn, he added.

The deferred payment could reduce the country’s energy bills in the winter months, but it does not mean cheaper gas for companies or households, financial website Portfolio writes. The government ended the blanket cap on retail energy subsidies in July, and regulated prices only apply to consumption levels below the national average.

The Orban government has done nothing to refute unjustified claims by Russian President Vladimir Putin that Moscow is selling gas to Hungary at a fifth of the market price. Although the price formula used in the Gazprom contract is secret, the price paid by Budapest is reportedly tied to the Dutch TTF gas exchange.

Analysts say the agreement in the short run helps ease country risks from the widening of the current account deficit. The revised July trade balance figures showed that Hungary’s energy imports during the first seven months rocketed to €12bn, up 268% y/y, leading to a deficit of €8.1bn in this product category.

According to recent data provided by the finance ministry, Hungary is expected to pay more than HUF5 trillion (€11.7bn) for gas this year, compared to HUF570bn three years ago. Rising energy prices were compounded by the weak forint, the third-weakest emerging market currency against the dollar this year, which has shed a third of its value year-to-date.

Hungary’s beleaguered currency made a sharp comeback in the evening hours after the announcement of the price deferral, trading at 418.5 against the euro and 427 against the dollar. Earlier in the year, the EUR/HUF and the USD/HUF rate hit records of 426 and 436.

The deferral in payments is "the minimum that Hungary deserves as a friend of Russia", because so far "we haven't really received anything", commented asset manager Viktor Zsiday.

Russian budget deficit soars in January, full year deficit could double to over 6% of GDP