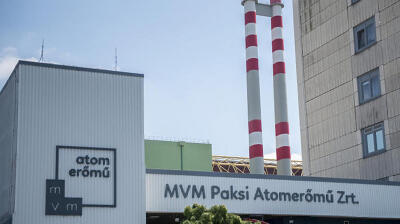 Hungary's sole nuclear power plant MWM Paks accounts for half the electricity production of the country.
By bne IntelliNews April 30, 2021

Hungary will start repayment of a €10bn loan for building the two blocks at the Paks nuclear power plant from 2031 instead of 2026, Hungarian media said, citing Russian news agency RIA Novosti.

The decision by Russia to modify the financial terms of the contract signals that Moscow is not expecting the new block to go operational before 2031, compared to the official 2025 start date.

Hungary has negotiated more favourable terms as the start date for repayment was pushed back from 2026 until 2031, the finance ministry said, adding that the standby fee for the credit was also "more flexible" in the modified contract. A decree by the Russian government on the issue was published on April 27 on the official government portal.

Hungary picked Russian state nuclear company Rosatom without a tender to build two 1,200 MW reactors for €12.5bn in 2014 and in a separate intergovernmental agreement agreed on the financial terms. Russia is providing a €10bn loan or 80% of the costs. The original 20-year maturity loan carries a 3.95-4.95% interest rate, above the market rates.

The amendment of the financial agreement was needed as the largest investment in the modern history of Hungary is years behind schedule.

Hungary agreed to pay off the loan from electricity produced by the new blocks. Under the existing contract, Hungary was to start the first payment no later than March 15, 2026.

Construction of the new blocks was to start in 2017, but a protracted European Commission probe and examination by local authorities concerning safety issues delayed the project by years.

Groundworks have begun at the site, but Hungary has yet to give its final permission for the project due to lack of compliance to EU safety rules by Rosatom.

Rosatom CEO Alexei Likhachev said earlier that this year that Hungarian regulators are expected to issue a license for the project and construction could start in 2022, Ria Novosti reported.

The parties targeted 2023 as the start date in the 2014 agreement, which was then moved back by two years. Officially 2025 remains the target for the completion of the first block, but that seems unrealistic.

According to the new arrangements, Hungary will repay the loan over a 16-year period instead of 21 years as originally planned. The first installment will be made no later than March 15, 2031. The financial terms of the loan was unchanged. At the beginning the loan will carry a 3.95% yield and the final installment will carry a 4.95% rate.

The government says the expansion of Paks is essential to guarantee the security of supply for Hungary's energy needs, as two blocks at the nuclear power plant with a combined 1,000 MW capacity will reach maturity by the early 2030s and will be phased out.

US warns Belarus to keep its commitment to neutrality
2 hours ago
US Secretary of State Blinken in Kyiv, warns Russia could attack “at very short notice”
3 hours ago
Defence agreement between Slovakia and the US divides politics and society
15 hours ago
Uzbekistan launches production of military drones
21 hours ago
New impetus between Bulgaria and North Macedonia at top-level Skopje meeting
1 day ago