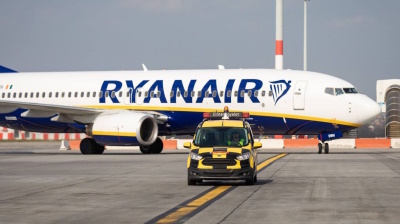 Hungary has ordered an immediate consumer protection probe into Ryanair on June 10, a day after the budget airline said it would pass on new windfall taxes to consumers.

Authorities will undertake a thorough investigation with a view to consumer rights and to prevent the airline's unfair business practices where possible, the statement said.

Hungary's government has levied new windfall taxes for a period of two years on the banking, insurance, energy, retail, telecommunications and pharmaceutical sectors, in addition to airlines, to fill the gaping hole in the budget.

The decree requires airlines to pay a HUF3,900 (€9.8) contribution per for travellers on flights bound for countries in the European Union as well as destinations in Albania, Andorra, Bosnia and Herzegovina, North Macedonia, Iceland, Kosovo, Liechtenstein, Moldova, Monaco, Montenegro, the UK, Norway, San Marino, Switzerland, Serbia and Ukraine. The contribution for other destinations is HUF9,750 per passenger.

Ryanair had launched a savage attack on the new tax a day earlier, announcing that it would charge the extra tax to passengers and gave passengers the option to get a refund on tickets. The Irish-based airline asked the government to repeal the new tax on airlines, which in its view will have a detrimental effect on air transport and Hungary’s tourism and economy as well.

"This ill-timed and ill-considered tax, which inexplicably compares the loss-making airline industry to highly profitable oil and energy companies, has made Hungary instantly uncompetitive and less attractive to airlines and tourists," the company said in a statement.

"The government considers it unacceptable and rejects in the strongest terms Ryanair's passing of the special tax on extra profit levied on airlines to passengers," Economic Development Minister Marton Nagy said.

The government is following market trends closely and will do everything in its power to prevent the cost of windfall taxes from being passed on to consumers, he said, adding that the government has also initiated a probe to determine if Ryanair's ticket pricing practices comply with all European norms and requirements.

Ryanair’s terms and conditions stipulate that it can pass on any windfall tax levied on the company and even on tickets bought earlier, Hungarian media reported.

Belgium introduced a €10 surcharge for journeys of less than 500km from April 1 on each departing passenger, and a €2-4 for journeys outside Europe. Ryanair immediately passed the extra cost to passengers who bought their tickets before the tax was introduced.