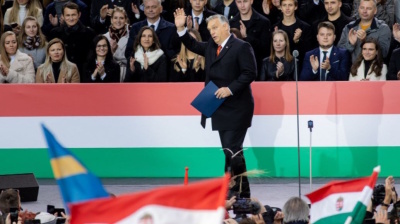 Hungarian Prime Minister Viktor Orban warned of the return of the opposition backed by global forces in a campaign speech at a pro-government rally on October 23.
By bne IntelliNews October 25, 2021

Tens of thousands gathered in central Budapest for the pro-government 'peace march' on the national holiday of October 23, marking the 65th anniversary of the anti-Soviet uprising. Hungary’s illiberal strongman Viktor Orban, who is bracing for his tightest election since 2006, warned of the return of leftwing forces supported by foreign powers.

Opposition parties held a joint celebration in front of a few thousand supporters after a successful historic primary election. The joint prime minister candidate Peter Marki-Zay said next year’s general election would be a colossal battle over the freedom of the Hungarian nation.

Hungary has seen a surge in new COVID-19 cases in recent weeks, yet the government has openly refrained from launching any restrictions on mass gatherings. Cabinet chief Gergely Gulyas made it clear earlier in the week that this was due to the largest pro-government rally scheduled for Saturday.

October 23 marks the beginning of the short-lived 1956 Hungarian revolution, but it is also the anniversary of the proclamation of the Third Republic in 1989. Since the change of regime, Hungary’s most solemn national holiday has been heavily over politicised. It has become the prime a day for political rallies and anti-government demonstrations.

This year, both the opposition and the government used it to kickstart the campaign for the 2022 election.

Pro-government civil group COF-COKA has organised a mass rally with the ambiguous slogan “Never again”. Beefed up by state funds, the group has held similar mass rallies to galvanise Fidesz' core base in times of turbulent political times.

Tens of thousands of people flocked to the capital from the countryside transported by buses of the ruling party, but Italian and Polish flags were also seen in the crowd. Supporters of Orban’s Polish conservative ally, PiS, have often made day trips to Budapest on October 23 or on March 15, when Hungary celebrates the anti-Habsburg revolution.

Due to COVID-19, last year’s commemorations were cancelled.

Viktor Orban did not waste much time on going back to history saluting the brave man and women fighting against Soviet tanks in 1956, instead, he recalled the violent events that unfolded in Budapest 15 years ago.

Hungary’s ruling party has built up a systemic campaign against Ferenc Gyurcsany, the leader of Hungary’s largest opposition party Democratic Coalition (DK), on the 15th anniversary of the police crackdown on anti-government protesters. Police used tear grenades, fired rubble bullets and water cannons that left more than a dozen supporters injured after they left a Fidesz rally in the afternoon of October 23, 2006, in central Budapest.

“On one side there were tear gas grenades, rubber bullets, plain-clothed unidentified police and water cannons, and on the other side stood a cheated and humiliated nation", he declared.

The dramatic events in the fall of 2006 still cast shadows on the opposition. Fidesz's propaganda aims to turn the 2022 election into a choice between Viktor Orban and Ferenc Gyurcsany, with one of the highest disapproval ratings.

The ruling party's communication campaign has replaced migrants and George Soros with Gyurcsany as the new bogeyman, political analysts noted.

Fidesz has spent more than HUF500mn (€1.3mn) during the opposition primaries conveying the message that whoever wins the race to face off Viktor Orban, it is Gyurcsany that pulls the strings and the opposition prime minister candidate will be his puppet.

It took a couple of days for the Fidesz communication offensive to change course and shoot at Peter Marki-Zay, after the conservative mayor of Hodmezovasarhely beat Klara Dobrev, the wife of Gyurcsany in the runoff.

In his speech in front of an estimated 100,000 people, Orban used the same clichés and campaign rhetoric as in the previous years, dividing the country and the world into "them" versus "us".

In a classic populist tactic, Orban divided the nation between conservatives and patriots on the one side, and an opposition led by people from the pre-2010 era, backed by the global elite, like Hungarian-born billionaire George Soros, who wish to undermine national sovereignty, were on the other.

"Those who fifteen years ago ordered shots to be fired at the public are now preparing again to take the stage", Orban said, adding that "Uncle George,  (George Soros) is also making preparations, somewhere, on the other side of the big sea."

Orban insisted that Hungary’s leftwing, backed by international forces, with money, media and network behind them, is so massive that "only millions of Hungarians joining together can defeat it."

Orban has also sent an unequivocal message to the European Commission that he won’t back down from the controversial LGBTQ legislation.

"We’re stopping overbearing LGBTQ propaganda at the school gate" the prime minister continued. It is high time for Brussels to understand that in the end "not even the communists got far with us," he added.

At the other end of Budapest’s iconic Andrassy street, Hungary’s own Champs-Élysées, a smaller yet more diverse and heterogeneous crowd gathered to hear the five candidates who ran in the historic primaries of the opposition.

Feeling the pressure from voters after two unsuccessful elections to topple Fidesz, the six-party coalition agreed in late 2019 to run on a joint ticket, bolstered by a successful local government election that dealt the first major defeat for the ruling party since 2010.

Hungarian opposition parties organised primaries to select candidates in 106 individual constituencies. After a fiercely fought campaign in the runoff, voters selected an outsider with no political party behind him as the prime minister candidate to lead the opposition against Viktor Orban.

Marki-Zay, who ran on an anti-corruption and anti-elitist campaign, also opened his speech drawing comparisons to the situation before 1956, when Hungarians were sick and tired of the one-party state rule, political cronyism, mounting Russian influence, wiretapping and hate campaigns.

He promised freedom of the press, the autonomy of local governments and a new electoral law. He also vowed that Hungary would join the single currency.

He pledged to keep the southern border fence with Serbia intact, but added that "criminal migrants imported by Fidesz" would be expelled from the country, referring to former Macedonian Prime Minister Nikola Gruevsky, who sought political asylum in Hungary, amongst others.

To follow up on his promises in the campaign to crack down on corruption, Marki-Zay said criminal proceedings would be launched against people who had profited from the controversial residence programme, under which more than 20,000 received EU residency permits until 2017 and those who had profited from the import of Sinopharm. One private firm acting as an intermediary reaped huge profit from the deal, as Hungary bought the Chinese vaccines at a premium price.

He turned to the young generation, asking them to become the voice of the opposition, spreading the message to people living in remote areas.

Hungary’s media landscape has changed dramatically in the last 10 years with the emergence of a powerful pro-government media empire. State media has become a propaganda tool for the government and independent outlets were subjugated or silenced in recent years. Hungary has slid in various press freedom lists in the last decade.

He warned other party leaders and the crowd to be ready for lies and slander campaigns. Fidesz will accuse the opposition of opening up the borders and settling migrants and raising energy prices, he added.

Klara Dobrev said that being democrat meant embracing diversity and encouraging diversity in everyday life. This is a great strength in the battle with the monolith system of Viktor Orban.

"Next spring, we either win together or we all fail. This is our responsibility," she added.

At the end of the speeches, all 106 candidates that won in the primaries took to the stage, and the five candidates posed for a joint photo holding hands.

EU likely to wait until general elections before imposing sanctions against Hungary
wiiw slashes Emerging Europe growth forecasts for 2022 and 2023
NEMETHY: Is monetary tightening the cure for inflation?