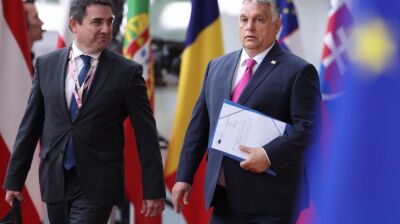 Hungary’s permanent representative to the EU, Tibor Stelbaczky, has stepped down from his post, according to local media, citing various sources. A spokesman for the Hungarian Embassy in Brussels refused to confirm or deny the report. Stelbaczky is expected to accompany Prime Minister Viktor Orban to next week’s summit in Brussels.

The 50-year-old diplomat, who begin his carrier in 1997, found himself in an awkward position two weeks ago when he had to block the adoption of the sixth round of sanctions against Russia, after EU leaders had agreed on the deal on the previous day.

Hungary refused to sign off on the oil embargo, citing the detrimental impacts on its economy. Eventually, pipeline delivery of oil was exempted from the sanctions and Budapest was given an unlimited period to switch from Russian gas to new alternatives. At the end of the summit on May 31, it seemed that the sixth EU sanction package would be approved, but Hungary unexpectedly torpedoed the deal to the dismay of EU ambassadors.

Prime Minister Viktor Orban said he would approve the package at the European Council meeting on the condition that Patriarch Kirill, a long-time ally of Vladimir Putin, was delisted from the sanctions list. Hungary's position on EU sanctions against the head of the Russian Orthodox Church has long been known, and nobody took issue with that stand at an EU summit, he said later to state media.

The EU agreed to delist the religious leader from the sanctions list to secure Hungary’s vote, as it required a unanimous vote.

Orban's stance has put the EU in a dilemma over whether to give in to the semi-authoritarian premier or double down, leading to paralysis in the EU council and potentially pushing Hungary towards the EU exit.

The repeated and prolonged use of Hungary's veto by Orban has triggered a petition by MEPs, who are calling for the end of the unanimous vote.

The petition call on change.org shows the photo of the Hungarian premier and the caption: Stop Orban’s blackmailing of the EU.

The signatories include Daniel Freund (Greens – Alliance for a Free Europe), Sven Simon (EPP) and Guy Verhofstadt, former Belgian Prime Minister and leader of the Group of the Alliance of Liberals and Democrats for Europe.

"The veto is not democratic. It prevents united action in Europe. It has very concrete negative effects on all of us. It must be stopped!" according to the petition.