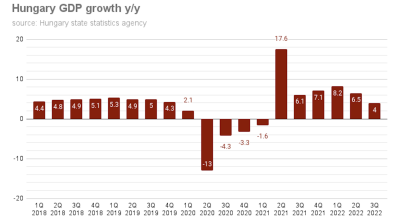 Hungary's GDP grew 4.0% y/y (chart) in the third quarter, slowing from 6.5% in Q2, the Central Statistics Office (KSH) confirmed in the second reading of data released on December 1.

The data shows a mixed bag as based on annual growth, Hungary was ranked among the best in the EU, but the quarterly contraction puts the country among the laggards.

The second reading confirmed that the performance of agriculture contributed very significantly to the loss of momentum, influenced by the drought. Growth in real household consumption has come to a halt, but Hungary’s industry and investment activity has held up during the quarter.

On the production side, services added 3.4pps to the annualised headline growth, while industry contributed 1.7pps and construction 0.1pp. The farm sector, hit by drought, shaved 1.8pps off headline growth.

On the expenditure side, final consumption contributed 2.3pps to growth, while gross capital formation cut 0.8pp off the headline figure. The trade balance added 2.5pps to headline growth.

Hungary’s economy emerged from the pandemic with robust growth last year and output has reached pre-crisis levels, fuelled by loose fiscal and monetary policy. Annual growth accelerated to 7.3% in the first half, lifted by a massive stimulus before the April election.

Hungary's GDP could grow 4.5% this year and output could stagnate in 2023 before returning to a 4% growth path, according to the latest government forecast.

The economy will bottom out in the first quarter and a significant improvement is expected from the second quarter, supported by improving purchasing power as inflation eases and interest rates retreat, according to Magyar Bankholding, which cut its growth forecast to below 5% from 5.3% but left its 2023 target unchanged at 0.4%.

The European Commission in a recent report raised its 2022 guidance from 5.2% to 5.5% but cut its 2023 estimate to 0.1% from 2.1%. The forecast assumes that Hungary reaches an agreement with the European Commission on the release of EU transfers, which could support the economy from H2 2023.

The IMF in its latest report projected that growth will decelerate from 5% in 2022 to near zero in 2023 as high inflation erodes households’ real income, as domestic policy tightens, external demand weakens, funding costs rise, and uncertainty weighs on investment.

The majority of the forecasts assume that Hungary reaches an agreement with the European Commission on the release of EU transfers, which could support the economy from H2 2023.

The uncertainty about the arrival of these funds could risk meeting the 2023 growth targets, analysts pointed out after the European Commission approved Hungary’s post-pandemic RRF plan, with the payout of the  €5.8bn on condition that Hungary implements 27 milestones. EU member states will vote in mid-December on whether to unlock some €7.5bn from Cohesion Funds.