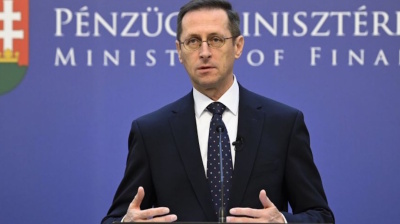 Hungary’s government decided to postpone HUF350bn (€956mn) of state investments to boost reserves by the same amount as the budget recorded a historic HUF1 trillion deficit last month, according to a decree published in the official gazette on December 10. A day earlier Hungary's finance minister lowered 2021 growth targets to 6-6.5% from 6.8%.

The announcement came after the budget reported the highest monthly deficit of all time in November, which lifted the budget gap in the first 10 months to HUF3.9 trillion, just shy of the HUF4 trillion full-year target. That is two-fold higher than the initial budget target approved in the budget act in the summer of 2020.

The reboot of the economy has been a success, as GDP expanded 6.1% in Q3, investments grew 12% and employment rose to 4.7 million and the jobless rate dropped below 4%, a short statement of the finance ministry read. This all means that there is less need for stimulus through state investments, it added.

Central bank Governor Gyorgy Matolcsy has called on the government on numerous occasions to cut back state investments and reduce the budget deficit at a faster pace. Hungary’s top banker has repeatedly warned of the risk of overheating and sustained inflation if the government maintains an expansionary fiscal policy.

At an October conference Marton Nagy, former MNB deputy-governor, now chief adviser to Viktor Orban, said the government would inject HUF4.8 trillion (€13.1bn)  into the economy between Q4 2021 and Q1 2022, totalling 7.5-8% of annual GDP.  There is HUF1.5 trillion earmarked for state investments financed from the budget in the six months from October until March 2022 and HUF1.5 trillion for EU-funded projects under the previous and the 2021-2027 budget cycle and the RRF scheme, he said.

The remaining fiscal stimulus includes state transfers such as tax refund for families,  pension bonuses, one-off bonuses for the armed forces, a PIT cut for those aged under 25 and also a 4pp cut in the payroll tax.

Matolcsy argues that the swift economic recovery would allow Hungary to return to a path of fiscal balance in 2022. The government approved the 2022 deficit with a 5.9% target, well above the 3% ceiling before the crisis.

Deferring public investments aims to ensure that the debt-to-GDP ratio will fall at the end of this year without draining much of the budget's liquid reserves, analysts said. The delay in the transfer of the EU’s recovery fund has also played a part in the decision, they added.

Finance Minister Mihaly Varga at a recent forum said the European Commission owes Hungary HUF320bn-330bn this year for a holdup of the approval of Hungary's Recovery and Resilience Facility (RRF) plan.

He said Hungary's GDP growth could be around 6-6.5%, revised from 6.8% earlier last month. Until the end of October, growth guidance ranged in the 7-7.5%, making Hungary’s economic recovery one of the steepest in the EU.