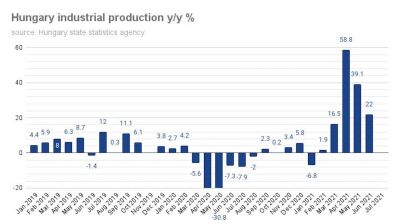 Hungary’s industrial output grew 22% y/y in June, albeit from a low base, as the economy plunged 7.4%, the Central Statistics Office (KSH) said in a preliminary reading on August 6.

The working-day adjusted data showed an 18.6% increase. KSH said all branches of manufacturing contributed to the increase, but growth slowed significantly in the vehicle segment, which has the largest weighting.

Growth slowed less in computer, electronic and optical products and food, beverages and tobacco products. Detailed figures will be released this week.

Industrial production grew by 18.8% in the first six months.

Output edged 0.3% m/m lower in June, despite a temporary shutdown at Audi Hungaria due to a shortage of semi-conductor chips, which suggests that other sectors may have offset that negative impact weighting on the vehicle industry, commented Takarekbank analyst Gergely Suppan.

"We expect a further gradual recovery in industrial production in the coming months, supported by new capacities in the electric car battery and vehicle production," Suppan added. Due to the base effect, industrial output is set to grow 15% this year and 8% in 2022. Industrial production could add 3pp to this year’s GDP growth, he added.

ING Bank chief analyst Peter Virovacz noted that the month-on-month decline was well under the drop in Germany, which could be attributed to supply chain interruptions. He projected "sustained but moderate" growth in the sector until those interruptions are resolved.

Hungary’s industrial production expanded by 21% compared to the 2015 average and by 47% above the average production level in 2010.