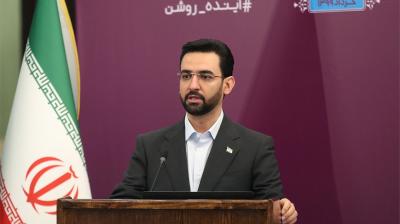 Iran's ICT Minister unveils the plan to get VOD into the hands of 5mn Iranians.
By bne IntelIiNews June 1, 2020

The flagship plan comes as part of a package of measures aimed at increasing Iranian usage of technology through the National Information Network (NIN), an internalised intranet launched in Iran in 2016.

The project, called “Every Iranian, an Internet TV”, will open up several new media providers to people with poor internet connections who presently unable to stream video content.

At the unveiling ceremony, ICT minister Mohammad Javad Azari Jahromi said the projects would boost the country’s digital economy, while emphasising that the digital economy could go a long way to replacing the oil-dependent economy that Iran has long relied on.

“On average, the global share of the digital economy is 15.5% of the total economy, showing that Iran has huge growth potential in digital businesses, and this is an area that needs to be concentrated on,” he added.

“Digital services are one of the key areas for growth while a number of jobs will be created in this sector,” said the minister.

Those funding the project include the second-largest mobile provider MTN-Irancell and Asiatech ISP. Both firms have reportedly invested in expanding their server capacities in different regions including Tehran and Tabriz—two data hubs for the project.

Users of several ISPs are able to sign up for a one-month trial of the service via the government website.

Iran has several private IPTV providers including internet provider Namava, owned by Shatel ISP, and Aio.ir, which showcases locally made and foreign box-set series and movies through the internet.

The digital push by the government is seen as a direct challenge to national monopoly broadcaster Islamic Republic of Iran Broadcasting (IRIB), which has seen its viewing numbers decimated in recent years, and Persian-language foreign satellite channels.

IRIB’s collapse in its viewing share is due in part to interesting expatriate satellite television channels like GEM TV and Manoto that are beamed directly into Iran and local movie studios which have evaded working with the strict state broadcaster and have opted for streaming options like Namava.

Not to be left by the wayside, IRIB recently purchased a controlling stake in popular television streaming service Telewebion.com. It was sold to the national broadcaster for an undisclosed sum.

The funding was accelerated by the COVID-19 crisis, during which demand for software and automation robots exploded, said co-founder Daniel Dines.

AliExpress Russia is aiming to reach $10bn gross merchandise volume by 2022-2023, and has not ruled out a future IPO.

Telco Ucom is seeking to block an attempt by rival Team – set up earlier this year by two of its former executives – to buy Veon Armenia.