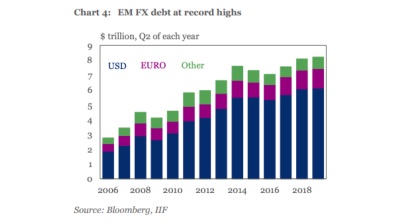 Global debt is at a record high of $250 trillion, but that debt has only added $28 trillion to the global economy
By Institute of International Finance November 22, 2019

Without question, rising debt levels have supported global growth since the 2008 financial crisis. However, there are increasing questions about the marginal utility of further borrowing—and a lot of concern that a continued ramp-up in debt could spark a fresh crisis, the Institute of International Finance (IIF) warned in a note.

The global debt load has grown by a massive $78 trillion since 2008 and as of H1 2019 has topped $250 trillion. China alone accounts for 40% of this global debt increase as the country’s non-financial corporates (notably SOEs) and households have cranked up their leverage. The US is responsible for another fifth of the global debt build up—largely a consequence of rapidly rising federal government debt. 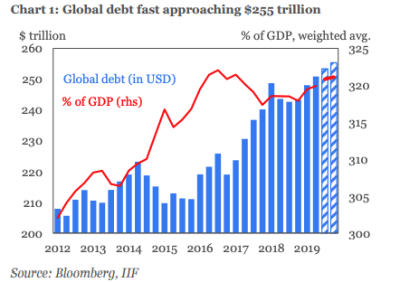 But the payoff has been modest: since 2008, the global economy has expanded by only $28 trillion, bringing global debt-to-GDP ratio to a record high of 320%. This clearly implies a declining growth-to-debt ratio—in other words, diminishing returns to debt. With no signs of slowing debt accumulation across major economies (notably US, China), we expect the global debt stock to exceed $255 trillion by year-end, or $193 trillion excluding the financial sector.

Accommodative central bank policies have been crucial in keeping a lid on borrowing costs across a range of mature and emerging markets. Indeed, low interest rates have helped keep debt service costs below historical peaks in many countries (despite rapidly rising debt), while also reducing the likelihood of severe refunding stress. However, this growing dependence on loose monetary policy has prompted widespread concern, including among central bankers.

For instance, Fed Chair Powell has been increasingly vocal about US public debt growth, reiterating in written testimony this week that, absent any meaningful reductions in the government’s large and “unsustainable” budget deficits, increasing interest expense could become a bigger burden on taxpayers in the long term.

Climate risk is pervasive: over one-third of cross-border investment portfolios held by investors in G20 countries are exposed to climate-stressed regions (prompting widespread initiatives to measure and assess climate risk). Moreover, growing demand for a “just transition” to a low-carbon economy is weighing on investors’ ability and willingness to fund large carbon exporters: for instance, Norges Bank aims to shift 1% of its AUM to renewables by 2022.

Investors could well look to reduce exposure to climate-vulnerable countries and sectors, which will ultimately mean higher borrowing costs: case in point, Sweden’s central bank has reduced its exposure to Australian and Canadian bonds due to climate-related risks.

As highlighted in our latest Global Debt Monitor, rising borrowing costs are a growing source of concern for high-debt countries that also have high exposure to climate risk (e.g. Japan, Singapore, Korea and even the US). Tackling climate change could be even more challenging and costly for some high-debt EM and low-income countries that may struggle to source international and domestic capital without sustained “easy money,”

Strong demand makes it difficult to engineer a weaker US dollar

Despite a series of Fed rate cuts this year and lingering worries over large US twin deficits, the strength of the $has been remarkable, as it hovers near all-time highs (on a trade-weighted basis). One of the important drivers of dollar appreciation has been strong overseas demand for $funding in capital markets. 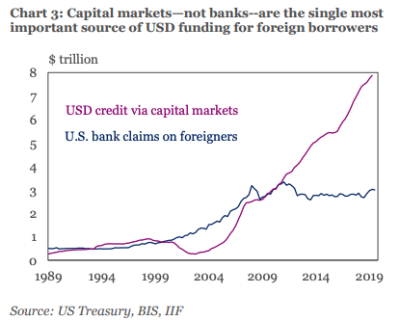 Rising demand for the greenback has been particularly notable in emerging markets, where $-denominated debt has increased from $2.8 trillion in 2009 to over $6.1 trillion in mid-2019 (Chart 4). By sector, the biggest contributors to this demand have been EM non-financial corporates ($debt has more than doubled since 2009, to $2.9 trillion) and the EM financial sector ($ debt up by $1.4 trillion to $2.3 trillion). In contrast, the buildup in $debt by EM governments has been relatively limited, at just $0.4 trillion over the past decade—in part reflecting the development of local currency government bond markets.

Furthermore, foreign demand for $liquidity has not been limited to EMs. According to BIS estimates, $debt incurred by non-bank borrowers in mature markets (ex-US) has grown by 80% since 2009 to a new record of over $8 trillion in Q2 2019. The $liabilities of non-US banks have risen steadily since the crisis—albeit at a slower pace than in the pre-crisis boom years (Chart 5). Japanese, Chinese and Canadian banks account for most of the increase—these liabilities have risen from below $10 trillion in 2009 to over $13.5 trillion at present. 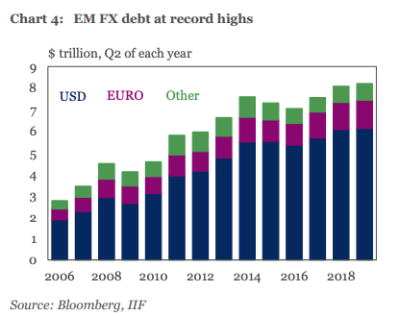 Visions of a new roaring twenties are seductive but climate change and geopolitics pose threats.

RIMMER: The Zoom when it happened

If you want to mingle with the unelected and corrupt cabal at the apex of the Russian regime, what better way of effecting an introduction than by hiring the erm, corrupt and unelected cabal squatting atop ours? Prince Michael of Kent is available.

ING: Russian CPI slows in April, but no further relief seen till year-end

Russian inflation has come down a little but will remain stuck at about 5.5% for the rest of this year. The Central Bank of Russia is likely to keep tightening at the coming meetings.

The stronger-than-expected wage growth remains puzzling, as based on the labour market data, the retail sector should not be in a downward spiral.

10 megatrends shaping emerging Europe in the post-pandemic 2020s
2 days ago
RIMMER: The Zoom when it happened
2 days ago
ING: Russian CPI slows in April, but no further relief seen till year-end
2 days ago
ING: Hungary’s wages vs consumption puzzle continues
3 days ago
ING: Czech economy falls by less than previously feared in 1Q
7 days ago