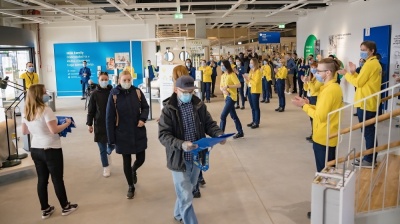 The Swedish furniture giant Ikea opened its first store in the Slovenian capital Ljubljana on February 25, amid the COVID-19 pandemic.

Ikea initially announced the opening of a store in Ljubljana for the end of 2020, but the plans were postponed due to the COVID-19 restrictions. Ikea had been mulling an online-only launch but went ahead with the physical store opening when the government eased restrictions earlier this month.

"Today's opening of the store confirms IKEA's commitment to Slovenia and paves the way for further business development in our newest market," CEO of Ikea Southeast Europe, Sara Del Fabbro, said at the inauguration in Ljubljana's BTC City shopping district, according to a press release from the mall.

“Today, when we face challenges like never before, we are thrilled to be able to welcome our first customers in Ljubljana. The fact that we can help Slovenians realise their great dreams and wishes in life at home is our greatest reward and privilege.”

Del Fabbro marked the occasion by planting a tree outside the store alongside Ljubljana mayor Zoran Jankovic, Sweden's ambassador to Slovenia Dag Hartelius and other executives from Ikea and BTC.

The launch took place just nine days after Slovenia allowed nonessential shops to reopen. The government started to ease restrictions on February 15 after the number of new infections stabilised in recent weeks after reaching a peak in early January.

The opening was a restrained affair compared to the huge queues outside the first Moscow Ikea that opened back in 2000, the deadly stampede at a store opening in Saudi Arabia or the stabbing when a new store opened in Edmonton, north London.

Due to the coronavirus epidemic, Ikea has introduced a special system for visiting the store. For the first few weeks, customers must book an online appointment.

The Ljubljana store is the fifth Ikea branch in Southeast Europe and one of more than 450 stores worldwide.

The store covers more than 31,000 square metres and will offer about 9,500 products. It employs 400 people. At the opening, colleagues from Croatia came to Ljubljana to help the Slovenian staff, according to local media reports.